Indian scientists can now produce fullerenes, a newly discovered form of carbon that has potential as a superconductor and catalyst. 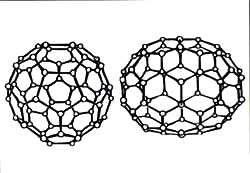 WOMEN have craved for diamonds and men have killed for them. The industrial revolution and the early economic development of the world would not have been possible without coal. Now, fullerenes -- the third form of carbon discovered only in 1985 -- promise exciting new applications from catalysis to superconductors. And, chemists the world over working feverishly to uncover these applications.

Fullerenes have a closed, cage-like, spherical structure, resembling a football, with either 60, 70, 76, 82, 84 or even 540 corners. Each corner is occupied by a carbon atom. These fullerene molecules spin at a tremendous speed -- some billion times a second -- even in the solid state, where most other molecules are slower.

It was only in 1990 that a German and US team of scientists could produce fullerenes in substantial amounts by vaporising graphite. Since then, research in this area of chemistry is quite the rage, especially because these molecules exhibit unique properties.

The IISc team began studying these molecules in 1991. Rao and his colleagues reported recently that fullerenes are also found in the soot produced from benzene flames and soot obtained when coal is vaporised. Says Ram Sheshadri, a scientist working with Rao, "We have the ability to produce fullerenes in our lab and this has provided the impetus to study several properties of fullerenes."

Rao's group has been studying what they call "phase transitions in the solid state". They find that at different temperatures, the nature of the molecule's rotation changes from a smooth type to a more discontinuous form -- or may completely freeze out with a drop in temperature.

The scientists are also studying the effect of pressure on the molecule's behaviour. All molecules, explains Sheshadri, have several energy levels that may or may not be occupied by electrons. When supplied with energy, electrons jump to higher unoccupied levels and then fall back, releasing energy as light. The scientists find that with an increase in pressure, the gap between energy levels in fullerene molecules can be squeezed. This, they say, has important implications for using fullerenes as superconductors.

Scientists have found potassium and rubidium salts of solid carbon 60 fullerene are semiconductors of electricity. While playing with these fullerene salts at different temperatures, IISc chemists discovered that the potassium derivative of carbon 60 becomes a superconductor at about - 2540 C. At this temperature, the molecules do not resist the flow of energy.

These molecules are also likely to find applications as catalysts in chemical reactions such as the production of formic acid that have substantial industrial importance. The reaction of these molecules with different solvents is being investigated. Fullerenes are among the best known electron acceptors and though still to be further explored, Sheshadri explains these carbon molecules may find an application in optical devices, allowing communication through light.