In the year of UNCED, the green movement continued to take tosses in the global context. The perception of the environmental crisis as mainly being a failure of technology and management was only one obstacle. Even more disastrous, UNCED paved the way for transfer of control of the world's resources to a global technocratic elite by transforming an issue of changing lifestyles and consumption levels of the rich into one of population growth and inadequate managerial capacity of the poor. 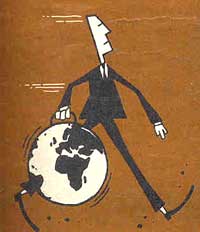 WRITING of the 1919 Treaty of PeaceJohn Maynard Keynes saidThe proceedings... all had this air of extraordinary importance and unimportance at the same time. The decisions seemed charged with consequences to the future of human society; yet the air whispered that the word was not flesh, that it was futile.The words could well have been written about Rio in 1992.

Many people participated in UNCED with the expectation that it would be a watershed in human history. But the discussions brought us no closer to a shared understanding of the problemlet alone a shared solution.

A major obstacle was the perception that environmental crisis is a failure of technology or management; andthat the goal isfor instanceto find better forest managerssafer CFC substitutescleaner fuelsmore efficient cars and improved insulation.

But environmental crisis is about the limits of tolerance -- of nature as well as of human beings. The key is to find a way to cease and desist collectively. But it is impossible to do this as long as some people have the ability to export their problems to people in other countries and other generations.

Those who can export their problems are typically the rich and the powerful. We cannot expect them to accept conditions being imposed on their own behaviour. Not surprisinglythereforeno one at UNCED raised seriously the issue of consumptionlifestyles or conditionalities. In its placeUNCED substituted population growth and inadequate managerial capacity amongst poor populationsand neatly diverted attention from the failings of the powerful and legitimised transfer of control to a global technocratic elite.

Howeverif the powerful will not be chastisedthe weak can scarcely be expected to sacrifice their subsistence. In the existing circumstancesthe poorparticularly in the Southwill not even consent to an agreement that distributes the costs of adjustment equitably. Obtaining this consent would be contingent upon the establishment of legitimate and just governance.

These two perspectives represent diametrically opposite principles of governance: democratic and technocratic. Half a century agothe issue in democratic governance was the empowerment of colonised peoples and the control of natural resources by independent nation-states. Todayit is empowerment of local communitiesacknowledgment of the primacy of local rights over global or national rightsand direct political participation at the local level. In this scenarioglobal governance of natural resources is simply a sideshow.

Howevermuch attention at UNCED was focussed on the oppositethe technocratic principlewhich involves a reassertion of values that were in retreat for some timenamelythe legitimacy of governance by a global technocratic elite. Todaythe environment is providing arguments why self-rule by formerly colonised people is not such a good idea.

The year brought us to a crossroadsbut we failed to take the right turning.

Tariq Banuri is executive director of the Sustainable Development Policy Institute in Islamabad.

Toxic Shipments
Ignoring worldwide protestsJapan went ahead with the shipment of weapons grade plutonium from Cherbourg in France for use in Japan's fast breeder reactors in Monju. Greenpeace and other environment organisations failed in their attempt to stop the plutonium oxide shipmentexpected to reach Japan sometime in February 1993. Japan also came under fire for persisting with its plans to start plutonium fast breeders at a time when other nuclear nations have either scaled down or scrapped their programmes.

A whale of a problem
Though whales are on the endangered species listpressure mounted on the International Whaling Commission (IWC) to lift the ban on commercial whaling by JapanNorway and Iceland. After an acrimonious IWC meeting in Glasgow last Julywhich saw Iceland walking outNorway claiming it would continue killing whales in 1993 and Japan again demanding a quota to kill whales in Antarcticacommercial whaling was banned for another year. The international reaction to Norway's decision to resume commercial whaling was far greater than its government anticipated and considerably undermined Prime Minister Gro Harlem Brundtland's credibility as an environmentalist.

Ramshackle reactors
No dump has been found yet for the high-risk residual waste every daily by 421 nuclear power stations in the world. Reactorsparticularly in the former Eastern Bloc countriespose a serious threat. There are 19 Chernobyl-type graphite-moderated nuclear stations which are still operating in RussiaUkraine and Lithuania because their decommissioning would cost unacceptable economic disruptions. The nummber 3-reactora twin of the shattered number 4-Chernobyl-reactorthough considered unsafe by the International Atomic Energy Agencyhas been reactivated because of the energy needed to survive this winter. Requests for aid to find alternative energy sources were turned down by the West.

Meanwhilethe sarchophagus of the intensely radioactive number 4-reactor is cracking and could collapse one day sending out a radioactive dust cloud.

Diversion of the Danube
The Danube was diverted this year despite massive protests in the long-running Gabchikovo-Nagymaroo dam saga. Hungary had pulled out of the project in 1989 saying the diversion would lead to an environmental catastrophe by lowering water tables and damaging fresh water supplies along the Hungary-Slovak border region. But the Slovaks pressed ahead and built dam with the help from Austrian and German companies. NowHungary has taken its case to the ECthe UN secretary-general and the International Court of Justice.

Rape of the Haleji
Overnightone of the longest protected and internationally recognised wetlands in PakistanHaleji Lake in Sindhwas opened to commercial fishing by a single contractoralso a known poacher. In two days10years of work in bird and reptile conservation was devasted as the contractor's men invaded the lakeside with their boatsdisturbed feeding wildlife habits and trapped warders in their nets. Concerted action by the Sindh Wildlife Management Boardenvironmental NGOs and the press forced the Sindh government to withdraw the order.

Debt write-offs
Thousands of people across Britain have been participating in campaigns directed at High Street banks demanding that the banks write off their Third World debts amounting to billions of dollars. The campaignsorganised by Friends of the Earth and other NGOshave been extremely successful in raising public awareness of the connection between banksThird World debt and the pressures to overexploit natural resourcesincluding rainforests. Heightened awareness has encouraged many to boycott certain banks completely. It has resulted in greater official recognition at a global level of the need to address debt as a root cause of environmental destruction.

Of people and prawns
The House of Tata's project to set up a prawn fishery farm in ChilikaAsia's largest brakish water lakeraised an outcry. Protests by environmentalistsstudents and local fisherfolk forced the Tatas to commission an agency to carry out an environment impact assessment (EIA). The EIA reportwhich stated the fishery project was not environmentally hostilewas prejected by the Indian Ministry of Environment and Forests. The Tatashoweverwill not commission another EIA and are pressing for permission to go ahead with the project. In counterpointactivist groups have intensified the campaign to save Chilika.

Save Calcutta
Calcutta seems to be heading for an ecological disaster because of the wanton commissioning of wetlands on its eastern and southern fringes as land for housing. The city witnessed a popular agitation led by People United for Better Living Conditions (PUBLIC) to save the wetlands. The intensity of the protest shook the state government out of its apathy to issue an ordinance forbidding the conversion of wetlands. But activists are not satisfied because the ordinance is not strong enough to deter unscrupulous land developers.

Dam dissents
Public opinion in India witnessed a dramatic rise against the building of dams and the consequent displacement of people. Apart from the continuing agitations against the implementation of the Sardar Sarovar Project on the Narmada and the Tehri dam project in Uttar Pradeshpeople have also come out against proposed dams in Bedti (Karnataka)Tipaimukh (Assam) and on the Koel-Karo (Bihar).