Coconut Development Board to market neera as health drink

Board says tapping of neera will enhance growers’ income 10-fold 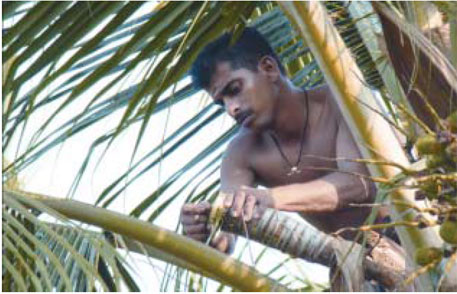 In 2001, two coconut farmers were killed in police firing at Vitlenahalli in Karnataka’s Channapatna taluk during an agitation to secure permission to tap neera, the sweet sap from coconut inflorescence. Thirteen years later, the Coconut Development Board (CDB) and the Ministry of Agriculture have decided to promote neera as a health drink, much to the relief of coconut growers in the state.

During a meeting on Tuesday at the Indian Institute of Science, Bengaluru, on the occasion of World Coconut Development Day, the Board highlighted neera as the future of the coconut sector in India. Citing the example of a farmer in Kerala’s Palakkad district, who last year earned Rs 55,000 from 17 coconut trees, T K Jose, chairperson of the board, said that neera would change the very concept of coconut cultivation in the country by providing financial security to the producers.

“Neera has the potential to increase the income of the producers by 10-fold,” says Sugatha Ghosh, Karnataka CDB’s Chief Coconut Development Officer. According to him, earnings through neera production is very high compared with coconut sales, which can fetch only about Rs 1,200 per year, per tree.

To allow farmers to tap neera, coconut-growing states will have to amend antiquated excise rules. If kept in its natural form for some time, neera ferments, turns sour and becomes toddy, an alcoholic drink. Excise rules are applicable for toddy. At the moment, Kerala is the only state in the country that has amended the rules to allow tapping and sale of neera. But the production has not flourished since it is difficult to keep the drink from fermenting for a long time. Moreover, the drink is not available in processed, bottled form.

To avoid fermentation of neera, Jose pointed out that CDB, along with other research institutes, have developed a technology for production and processing of neera that would ensure a shelf life of nearly a year, without letting the drink turn sour. “Such technologies will help in marketing neera and its byproducts in packaged form to ensure hygiene,” he added. According to an estimate by CDB, it is possible to create 2.4-2.8 million jobs in the farm sector through the production of neera.

Ananth Kumar, Union minister for chemicals and fertilisers, who inaugurated the function, urged all states to promote the production and sale of the drink to bring economic stability to coconut farmers. He added that a round table meeting of the Union agriculture minister, finance minister and agriculture and horticulture ministers of all coconut-growing states will be convened soon to discuss the action plan for amending the existing rules to enable neera production in all coconut-growing states.