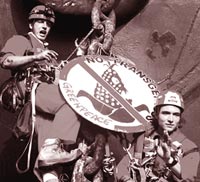 In 2002, after much pressure from groups of indigenous people, scientists and non-governmental organisations, the North American Commission for Environmental Cooperation (nacec) undertook a study of the genetic contamination of traditional corn in Mexico's Oaxaca state -- a hot spot for the crop. Genetically modified (gm) maize imported from the us was suspected to be the adulterant. Now the environmental watchdog Greenpeace claims that the study was ready by June, this year but has not been released so far, because it contradicts us transnationals on gm crops. nacec, however, claims the report was not prepared till September 13, and that it has 60 days to present it to a council comprising governments of Mexico, the us and Canada. It is for the council to decide if the report can be made public. Greenpeace has now threatened that it will use Mexico's transparency laws to get the report released soon. If that does not work, the organisation intends to take recourse to international law.