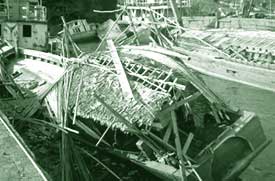 the andaman and Nicobar islands face a severe pollution threat from foreign trawlers that intrude into Indian waters and are apprehended by the country's security forces. The Indian Navy and the Coast Guards seize at least two such vessels every month. Most of these belong to the neighbouring south east Asian countries. After seizure, they are dumped at select harbours for years, polluting the sea and disturbing the marine ecology.

According to the rule, a trawler is to be either sent back to its country or auctioned locally after the case of its illegal entry gets over. But at any given time, there are several such vessels docked in the harbours. These are the ones on which the court verdict is awaited or which were not sent back. Many of them belong to Burma.

"Most of these vessels are really in a bad shape. Some are half submerged, some have already made it to the bottom of the sea. They ultimately disturb the ecology of the coastal area," complains Subhasis Ray, general secretary of Healthy Environment and Less Pollution (help), a local non-governmental organisation. "We have voiced our concern against this practice on several occasions, but the authorities are least bothered," he adds. Atlanta Ghosh, a help member who is also a researcher on marine biology, told Down To Earth that a recent study points out that a part of the marine life around the islands has already been contaminated with toxic salts. Consumption of these species by humans as seafood may cause anaemia, kidney failure and brain damage. The pollution also threatens the mangrove forests, which protect the feeder creeks from sea erosion and sustain fisherfolk.

But Andaman's chief port administrator Dilleshwar Rao claims otherwise: "We are taking utmost care to minimise sea pollution. Earlier, we dumped all these ships at an important harbour but now we are dumping them in harbours on remote islands." Environmentalists say even the trawlers dumped on remote islands deposit pollutants like iron rust, paint and oil on the sea bed. Rao says the seized vessels are handed over to the police and it is the latter's duty to take care of them till their case is over. Though Superintendent of Police A K Singh refuses to accept that the vessels cause pollution, his revelations actually hint the pollution may be widespread: "We keep boats at the places from where they were apprehended. It depends on the location of the court." "There are over 50 such vessels in different ports even after 64 were removed from the sea bottom" Ray says, adding that the only solution is to dock the trawlers at seashore, where they will be far from the sea and less likely to break.