Comfort above the clouds 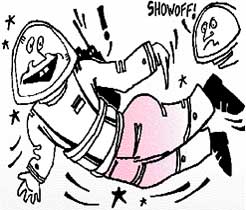 if you thought that the National Aeronautics and Space Administration ( nasa ) only flew missions to esoteric destinations and designed spacecrafts to endorse the 'Star Wars' programme, there is some news for you. Three technologies originally developed by nasa scientists have been inducted into the Space Technology 'Hall Of Fame' recently for their contribution to enhancing the quality of life.

The technologies are those for anti-shock trousers, flame retardent seat material, and the radiation barrier. The first two have been patented by engineers from the Space Technology Division of the nasa Ames Research Centre of Mountain View, California, while the third was developed by technicians from the Johnson Space Centre in Houston, Texas, for the Apollo programme. The anti-shock trousers are modifications of the anti-gravity flight suits for pilots and astronauts, the flame retardent material was an offshoot of the research on flammable polymers that followed the tragic Apollo accident of 1967 that killed three astronauts and the radiation barrier was developed to protect the crew capsule from extreme ranges of temperature in space.

A major hazard that an astronaut faces during flight is associated with the shifting of body fluids when he encounters transition from a zero gravity situation to normal and vice versa. Pilots of high speed combat aircrafts also face this at a smaller level. The trousers and suits that nasa has developed are fitted with pneumatic bladders that swell up at extremely low gravity situations and thus maintain a constant pressure on the blood vessels. Recently, a physician at the Stanford University Hospital in California successfully used an anti-gravity pilot suit to stem the internal bleeding of a patient. The key to stop internal bleeding is application of the right amount of pressure at specific sites and doctors can easily control the pressure exerted by the bladders in the suits. Since its inception in the early 1980,the technology has been used over two million times to treat hemorrhage patients.

Demetrius Kourtides of the Ames Research Centre found out that many a polymeric material can be safeguarded from direct ignition by the use of a fire-resistant material that essentially 'encapsulates' the more flammable material inside. A compound developed by the nasa scientists proved to be an effective fire-blocker and was thermally stable at very high temperatures. More than 600,000 seats in spacecrafts and combat aircrafts have since been fitted with the new compound and researchers are trying to develop a variety that can be used for automobile seats too.

Says Henry McDonald, the director of nasa Ames Research Centre, "We are thrilled that these nasa -developed technologies have found such wide adaptation and helped save so many lives."