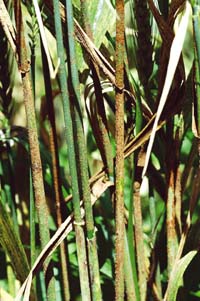 a new form of stem rust, a fungal disease of wheat, which has jumped from eastern Africa to Yemen, may affect the Indian wheat population in the next four years. Scientists are concerned but the good news is that some Indian varieties have been identified, which are resistant to the fungal infection.

"Spread of the fungal infection is quite unpredictable, as it has now reached Yemen. There should be no reason why it cannot spread in India," says Ravi Singh, stem rust expert of the International Maize and Wheat Improvement Centre (cimmyt).According to him, Global Rust Initiative (gri) is working closely with the Indian Council for Agricultural Research to find solutions to this impending danger.

Researchers at gri and Agricultural Research Service of the United States Department of Agriculture (usda-ars) have confirmed the existence of the disease in Yemen. There is also evidence that the disease has spread in Sudan but more tests are needed to confirm the finding, say gri researchers. The new strain, known as u g99, was also found in Uganda, Kenya and Ethiopia.

The last major epidemic of stem rust occurred in North America in the early 1950s, when a strain of stem rust destroyed as much as 40 per cent of the country's spring wheat crop. A year ago, scientists at cimmyt plotted the probable trajectory of the fungus, whose spores can travel large distances aerially. They had predicted that if the fungus crossed from eastern Africa to the Arabian Peninsula, it could easily spread to the vast wheat-growing areas of North Africa, the Middle East, Pakistan and India. gri researchers say that most varieties of wheat grown in these areas are susceptible to the strain of stem rust.

The concern is obvious. "If we don't control this stem rust threat, it will have a major impact on food security," says M E Tusneem, chairperson, Pakistan's Agriculture Research Council.

India produces around 70 million tonnes of wheat annually.Losses from stem rust infection depend on the timing of infection and environmental conditions."A conservative 10 per cent aggregate loss scenario (seven million metric tonnes) with a world price of us $200 per tonne would amount to a loss of us$1.4 billion annually in India," Singh said.

Measures are being taken. "ug99 resistant varieties are being developed and multiplied through collaborative efforts involving Indian research scientists. This is the most ecologically and economically viable solution. It will take time, besides resources and political will, to accelerate the process," says Rick Ward, co-ordinator of Global Trust Initiative.