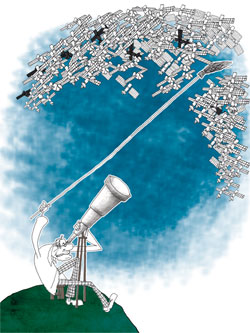 On june 30,Satish Dhawan Space Centre in Sriharikota launched a rocket. On board were five satellites. The main passenger was a French Earth observation satellite, weighing 700 kg. It was accompanied by four tiny ones: two from Canada and one each from Germany and Singapore. None of these weighed more than 15 kg.

This is a “global endorsement of India’s space capability”, declared Prime Minister Narendra Modi soon after the successful launch of the rocket, Polar Satellite Launch Vehicle (PSLV)-C23. Once in space, the German satellite will monitor sea-traffic, the Canadain satellites will test formation flying of spacecraft and the one from Singapore will establish inter-satellite link.

Small satellites are cheaper and miniature versions of the behemoth that weigh in tonnes. These can be categorised as picosatellites (under 1 kg), nanosatellites (1 kg to 10 kg) or microsatellites (10 kg to 100 kg).

The world’s first small satellite was launched on October 4, 1957, by the Soviet Union. It was called Sputnik1 and weighed 84 kg. Riding high on the Cold War sentiment, the US’s first small satellite—Explorer 1—followed soon in January 1958. In the 55 years since then, the sector is revolutionised through sustained research and is no longer a government-exclusive domain. At least 170 small satellites now orbit the Earth and are engaged in various activities, from tracking wildlife, monitoring sites ravaged by natural disasters and looking for crashed planes like the recent MH370 to conducting space-based experiments, like searching for Earth-like planets outside the solar system. Their utility is limited only by the experimenter’s imagination.

In the past, the Indian Space Research Organisation (ISRO) has launched small satellites like IMS1 and HAMsat. IMS1, also called Third World satellite, was an Earth observation satellite and is past its life. HAMsat still caters to the amateur radio community. At present, most small satellites launched by ISRO are built either by students at Indian universities or by other countries. While ISRO offers service to foreign agencies for a price, it offers free rides to the ones designed by students (see interview).

India’s first student satellite was ANUsat. Weighing 40 kg, the microsatellite was built by Anna University in Tamil Nadu and was launched in 2009. A year-and-a-half later, students from seven engineering colleges in Karnataka and Andhra Pradesh launched a picosatellite, STUDsat, which weighed 950 g. A proliferative year for Indian small satellites, 2011 saw the launch of three student satellites: 92 kg YOUTHsat, developed under an India-Russia collaborative project; 10.9 kg SRMsatdeveloped by SRM University, Chennai, and 3 kg Jugnu by IIT Kanpur.

“Creating Jugnu was educative and interesting,” says Shashank Chintalgiri, the then student leader of the team. “As a technology demonstration mission, where the primary objective was to develop necessary technology and skills, the Jugnu team was able to show that development of a complete, robust, field-deployable technology was possible in the setting of an Indian university,” he adds. Among other objectives, Jugnu hoped to generate imaging data for agriculture. As per formal mission success parameters, Chintalgiri pegs Jugnu’s success rate at somewhere between 60 and 70 per cent.

While ISRO has not launched any student satellite after 2011, many are being developed across the country.

One such attempt is by students at Manipal University in Karnataka. Their small satellite, Parikshit, aims to generate a thermal map of the Indian subcontinent that will help identify urban heat islands. It will also demonstrate the satellite deorbiting technology, developed by Australia’s Saber Astronautics. “Conventionally, a satellite remains in orbit, even after mission life. This adds to the amount of space debris. We are using a technology to pull the satellite down and burn it up as it re-enters the atmosphere,” says Chandra Shekhar, team member of the project and a BTech final year student in computer science. Before deploying the technology on Parikshit, student leader of the team, Adheesh Boratkar, travelled to NASA to test its efficacy in zero-gravity flights. The results he saw were astounding.

IIT Bombay is also involved with two nanosatellites: Pratham and Advitiya. Tushar Jadhav, a student and project officer, says work on Pratham is nearly over and work on Advitiya has just started. While mission objectives for Advitiya are yet to be defined, Pratham hopes to generate Total Electron Content (TEC) map of India. Jadhav explains, the ionosphere which ranges from 85 km to 600 km in altitude is a unique part of the atmosphere as it consists of free positive ions and electrons, ionised by solar radiation. It plays a key role in the long-distance radio communication. GPS signals also travel through this band. The density of electrons keeps on varying due to several reasons like solar flares and changes in the Earth’s magnetic field, making it difficult to predict variations in density. This variation induces errors in GPS communication. If the electron density (TEC) is known, there is a possibility of correction of errors in GPS, says Jadhav. Depending on the performance of Pratham, Advitiya’s design will be improved.

IIT Madras is working on a small satellite, IITMsat. David Koilpillai, faculty coordinator of the project, says, “IITMsat will carry a high energy particle detector called SPEED (Space based Proton and Electron Energy Detector), which will look for anomalous precipitation of high energy charged particles—protons and electrons from the Lower Van Allen Radiation Belt.” Van Allen belt is a layer of charged particles around the Earth held in place by the magnetic field. It is expected that the data will be correlated with all events that can cause disturbances in the upper ionosphere, such as thunderstorms, solar flares and seismic precursors, he says, adding that the data will be freely available to the scientific community around the world.

Taking the legacy of Jugnu forward, its student team has launched a company, Firefly Aerospace. “It aims to preserve and build on the technology developed for Jugnu,” says Chintalgiri. “We are not building any satellite and do not intend to do so until we see a clear path to commercial viability. We are now toying with a service model,” he adds.

Bengaluru-based Dhruva Space Pvt Ltd, is another such startup headed by student innovators. The company acts as a facilitator for other small satellite developers and is developing its own small satellite. “The baseline design for the first satellite is complete,” says Narayan Prasad, co-founder of Dhruva. “If executed and launched, it may become the perfect proof of our concept and help us establish our selves firmly in the field”, he adds. A lot of Dhruva’s success in the market will depend on the first satellite they build. The team is not yet ready to reveal the mission objectives of this first satellite. Dhruva is self-funded and looking at venture capitalists (see ‘Young innovators’).

Across the world, other key companies in the field are UK-based Surrey Sapce Technologies Ltd, US-based NanoSatisfi and Berlin Space Technologies (BST).

BST, a spin-off of Technische Universität Berlin (TUB), is one of Europe’s leading hubs of small satellite development. It has built and launched 10 satellites since 1991. Incidentally, its fourth small satellite, DLR-TUBsat, was the first foreign satellite to be launched by ISRO in May 1999. Tom Segert, head of Business Development of BST, says, “Our satellites can obtain 80 per cent of the performance of larger satellites at a cost which is less than 30 per cent of the bigger bird’s price. We do so by using non-space technologies and keeping the satellite as simple as possible.” Indian companies that leverage on ISRO’s developments, skilled work force and infrastructure, could tap into new markets open for ISRO alone, he adds.

While the mood in India’s small satellite arena does look upbeat, it may be worthwhile to learn from mistakes on the go to ensure higher success rates in future missions. Prasad suggests, “ISRO should initiate constellation missions that involve small teams running on a stringent time line.” Huge teams, where members join and leave often, lowers a team’s accountability and productivity. Points out Nithin Sivadas, a student associated with IITMsat project, “satellites need to be tracked well after launch to get adequate return on the money spent in building them.” In Chintalgiri’s words, “we need to build a strong technical ecosystem, not a strong space ecosystem. The space ecosystem will follow as a natural consequence.”