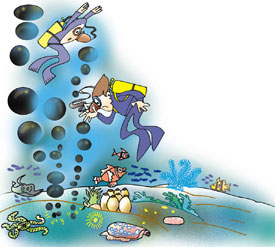 british and Norwegian oil companies have announced plans to bury carbon dioxide under the bed of the North Sea. Though they claim they are trying to inhibit climate change, the actual purpose is more mundane increased exploration of oil and gas reserves. Experts have expressed environmental concerns about such sequestering schemes. They feel carbon dioxide is going to seep out to the atmosphere anyway, so this is a stop-gap option to control climate change. What is worse is, according to them, such schemes will bring about ecological imbalance in marine life. Third, it distracts from investment in renewable energy technologies.

Carbon sequestration under the earth or sea has long been regarded, especially by the us, as a solution to mitigate effects of global warming. It involves power stations and oil rigs holding on to their emissions of gases and then pumping them underground to keep them out of the atmosphere.

To investigate the possible effects of feedbacks between global climate change, ocean carbon cycle and oceanic carbon sequestration, Jain and his colleagues developed an atmosphere-ocean climate-carbon cycle model. The study found that climate change has a big impact on oceans' ability to store carbon dioxide and the effect was most pronounced in the Atlantic Ocean. According to Jain, "Injecting carbon dioxide in the Atlantic Ocean is more effective than injecting it in either the Pacific or the Indian Ocean."

Sequestering carbon in deep sea can help companies like Statoil, British Petroleum and Shell, exploit oil reserves further. By pumping carbon dioxide into old oil and gas fields, it is possible to get at some reserves that might otherwise have been unattainable. While industry is pushing hard for the technology, the onus to examine its environmental viability is on the government. The us is spending millions of dollars to investigate the feasibility of sequestering programmme. The ukis not far behind, considering it has to reduce greenhouse gas emissions by 12.5 per cent by 2012.