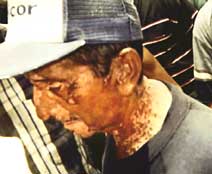 Thousands of campesinos of Nicaragua, who work in farms and have been affected by the use of the pesticide Nemagon, will benefit from a new pact they recently signed with the government. Nemagon is derived from dibromochloropropane (dbcp), a possible carcinogen. The agreement includes provisions for medical care of victims and their relatives, a lifelong pension for them and legal aid for pursuing lawsuits filed against Nemagon's use. The government has also agreed not to revoke a 2001 law, which allows campesinos to sue the us- based companies that used Nemagon on their banana plantations for decades.

The us government had declared dbcp a possible carcinogen way back in 1975 and had banned its use in most cases. But us companies continued using it in Nicaragua, killing hundreds of banana plantation workers. In 2004, a Nicaraguan court ordered Shell Chemical, Dole Food and Standard Fruit to pay us $82.9 million to 81 campesino women, who suffered illnesses caused by Nemagon. About 4,000 workers and their families had been camping outside Nicaragua's national assembly, its legislative body, since March 2005, demanding the pact.