As the Laos government basks in the glory of building a "model" dam, thousands of villagers are unlikely to be compensated 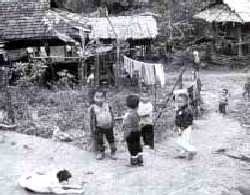 the first major dam to be built in Laos in the last 20 years has sparked off a series of environmental and commercial fears. The us $260 million Thuen Hinboun dam -- built with Norwegian and Asian Development Bank's ( adb ) assistance -- will sell power to Thailand. The dam became operational in April and was being projected as a model for future dams.

However, a report released by the us -based International Rivers Network ( irn ) warns that the dam is affecting thousands of villages that are unlikely to be compensated. A survey conducted in early March by the irn found evidence that as fish catches dropped between 30 per cent to 90 per cent when the dam was closed in January, villagers were forced to move out. Many crops were also affected and vital freshwater springs inundated.

"As the developers of the project trumpet its success, several thousands of villagers are experiencing an imminent threat to their livelihoods,'' writes researcher Bruce Shoemaker in the survey report.

The study called for urgent action to assist villages, warning that just us $50,000 had been set aside for relocation of people in the deal. Also, all future compensation is now in the hands of the Laos government.

Recent adb statements described the dam as a "winner" and set "to pay back its investors big time". But it warned that the dam's financial success had been hampered by the region's currency crash.

The build-own-operate-transfer deal is 60 per cent owned by the Laos state power supplier, 20 per cent by Thai interests, and the rest by a Scandinavian consortium, Nordic Hydropower. The Electricity Generating Authority of Thailand has agreed to buy power from Laos under a deal signed at old exchange rates, a move that could see a net loss for the country of about 20 per cent of total revenues.

The dam has been seen as a forerunner to the far larger Nam Thuen ii dam, a controversial project set to flood parts of the environmentally-precious Nakai plateau.