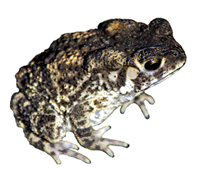 a compound found in the Indian toad's skin can cure liver and blood cancer. The compound, called bm-anf 1, has been found to prevent the growth of cancer cells in experiments conducted by the Department of Physiology of the Calcutta University.

Bufo melanostictus-antineoplastic factor 1 (bm-anf1) is helpful in checking proliferation of human liver cells that lead to liver cancer. "Chinese medicinal text mentions the use of giant toad skin for the treatment of cancer," says Antony Gomes, lead researcher. Bufalin, a chemical found in the skin of the Chinese toad (Bufo bufo gargarizans), has been proved to destroy human leukaemia cells.

The newly-found non-protein compound from the India toad's skin extract has similar characteristics. "Indian common toad's skin extract too possesses this anti-cancer potential," says Gomes.
Researchers treated the human blood as well as liver cancer cells with bm-anf 1. It activated certain proteins (p21 and p27) which in turn curbed the activity of other proteins like cyclin-dependent kinases (cdk).

Proteins like cdk belong to the group of protein kinases which was discovered to be involved in the regulation of the cell cycle. The proteins are helpful in suppressing the proliferating cell nuclear antigen. This is a protein which plays a significant role in normal cell cycle regulation. The scientists have found that this particular character of bm-anf 1 arrested the cell cycle and growth of cancer cells.

bm-anf 1 causes blebbing (an irregular bulge in the plasma membrane of a cell), perforation of the cell membrane and deep crevices in blood cancer cells are signs of programmed cell death. This proves the ability of this compound to cause controlled mass death of cancer cells, also known as apoptosis, sparing healthy cells.

Meanwhile, detailed spectroscopy studies reveal that bm-anf 1 is likely to be a chlorinated inorganic-complex molecule in the presence of chlorine and sodium in a particular ratio. When exposed to normal human leukocytes (white blood cells), bm-anf 1 was also found to be less toxic towards normal cells and more toxic to cancer cells.

Experts say that India which has thousands of people suffering from liver cancer could benefit from this. Researchers from the Indian Institute of Chemical Biology, Kolkata, and gvk Biosciences, a Hyderabad-based research organisation also collaborated with the study.

The findings will appear in the November, 2007 issue of the journal Toxicon. This is a preliminary toxicity study of bm- anf 1 as a potential anti-cancer agent.