Confusion prevails on who can ban PoP idols

Courts fail to give clear-cut answers 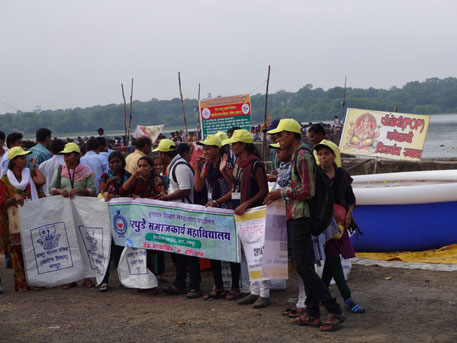 Which agency is equipped to ban substances harmful to the environment? A look at the history of the legal initiatives in this direction shows there are no clear answers.

In July this year, Nagpur city’s three-year long effort to ban idols made of plaster of Paris (PoP) within city limits fizzled out when associations took the plea that under Article 19(1)(g) of the Indian Constitution, a civic body is not empowered to ban any kind of trade and that only the state and Central governments are empowered to do so.

Following the Central Pollution Control Board’s 2010 guidelines, which clearly state that idols should only be made from natural materials like paper pulp or clay and painted with natural colours, the Gujarat government issued an order on January 23 this year, banning both PoP idols and chemical colours within the state.

However, groups of idol-makers in the state challenged the ban in court. On May 9 this year, the National Green Tribunal's principal bench in Delhi ruled that the Gujarat government does not have the power to impose a ban on PoP idols under Section 5 of the Environment Protection Act 1986, since only the Central government can issue orders under the said Act.

However, state governments can impose a ban under different sections of the Water Act 1974, said NGT. It also observed that despite there being several observations to the effect that PoP makes water alkaline and may impact aquatic life, there is no scientific information on the subject (see: How Harmful is POP?) and called upon state pollution control boards to set up expert committees to study the environment impact of PoP.

Activists argue that a vital water pollution-related issue is being sidelined country-wide because of legal confusion. “What is apparent is that there is no political will on the part of governments to tackle the problem, since it pertains to religious sentiments,” says Avinash Patil of Andhashraddha Nirmoolan Samiti, an NGO fighting to root out superstition and associated rituals.