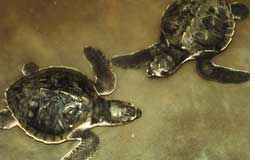 Members of the World Conservation Union (iucn) are sharply divided over the eco-friendliness of the port coming up at the mouth of river Dhamra in Orissas Bhadrak district. The huge port is a joint venture between Tata Steel and L&T. Speaking in two contradictory voices, conservationists are yet to come up with a verdict on whether or not the upcoming Dhamra port is fauna friendly.

At the centre of this controversy are endangered Olive Ridley turtles, which visit the Orissa coast for mass nesting. iucns Marine Turtle Specialist Group (mtsg) was invited by Tata Steelafter Indian conservationist groups declined to evolve measures to mitigate the impact of the upcoming port on marine turtles. Nicolas J Pilcher, co-chair of mtsg, believes the mitigation measures work perfectly and commends the project for being proactive.

The issue is not how good or bad the mitigation measures are, says Romulus Whitaker, an mtsg member from India. The issue, according to him, is location. The port is too close to Bhittarkanika national park (less than 5 km) and Gahirmatha marine sanctuary (less than 15 km), whose beaches are one of the largest nesting sites for Olive Ridley turtles in the world.

The mitigation measures are limited only to Dhamra Port, there are other ancillary industries which have come up and will have greater cumulative impact on the local ecology, states Whitaker. Pilcher argues that turtles and ports around the world are known to coexist. We have ensured all dredging proceeds according to the best international standards.


In the midst of all this heat, of argument and counter-argument, the turtles too, it seems, are making their point. There has been no mass nesting this season at Gahirmatha marine sanctuary. Indian conservationists believe this is a fallout of dredging at the port site. Last year a Greenpeace-commissioned survey found over 2,000 turtle carcasses near the construction site. Port officials refute this by pointing out that the survey throws no light on what led to these deaths, which they claim was caused by fishing trawlers. Tidal currents, they explain, brought the dead turtles from their nesting site to the port area.

Perhaps, say Indian conservationists and raise the issue of fisherfolk when artisanal, or traditional, fishermen are not allowed within 15 km of Gahirmatha sanctuary, how can such a mega industry be allowed so close? There is tremendous resentment and anger in the fishing community here. They are being singled out in the name of turtle protection, says Biswajit Mohanty of Wildlife Society of Orissa.


Indian conservationists also point out the unresolved issue of the environment impact assessment (eia). The 1997 eia considered Kanika islands as the port site, whereas the site now being developed is on the mainland, states Whitaker. In another allegation Indian conservationists point out the eia was approved on the premise that the project was an extension of an existing port and not a new port. iucn agrees this is not an expansion project. This creates procedural loophole because a new port requires clearance from the union ministry of environment and forests whereas expansion is cleared by the union surface transport ministry.

According to Basudev Tripathy, a member of mtsg in India, all this ambiguity over the nature of the project has pre-empted a thorough review of the eia by the state government and ngos. What is more, the eia does not provide any baseline ecological data or assess the impact on the turtles, says Tripathy. It is not that we are against the involvement of iucn or its mitigation measures, we feel mtsg members from India should have been consulted simply because they know the land and the ecology better.

Tripathys verdict is that without a credible eia and baseline ecological data, no mitigation plan can safeguard marine turtles.

With inputs from Ashutosh Mishra in Orissa