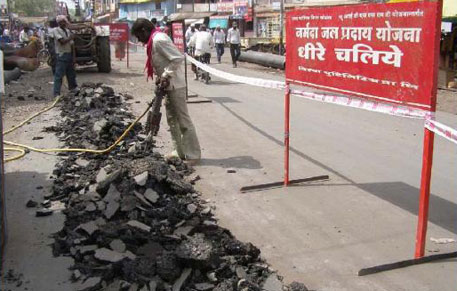 The decision of the municipal authorities of Khandwa, a medium-sized town in Madhya Pradesh, to hand over water supply services to a private company, has been stalled. The Consumer Forum of Khandwa stayed the notification for water supply privatisation on December 31 and asked the city’s civic body to address all the objections raised by residents against the privatisation project. The next date of hearing has been fixed for January 22.

Water supply in Khandwa was handed over to Vishwa Utilities Pvt Ltd, a Hyderabad-based company, under the Urban Infrastructure Development Scheme for Small and Medium Towns (UIDSSMT), a Government of India scheme, through a public-private participation (PPP) project. The Khandwa Municipal Corporation (KMC) published its notification on December 3, 2012.

The Khandwa water supply augmentation project was awarded to the private company for augmenting water supply to the town for the next 25 years. The project has been under execution since October 2009. The private party would supply water to the town at the rate of Rs 11.95 per kilolitre. Raw water for this would be pumped from a reservoir 51 km from the town.

Local residents have been actively campaigning against privatisation of water services for some time. More than 10,000 Khandwa residents have submitted their complaints against the PPP project for 24/7 water supply.

A study by non-profit Manthan Adhyayan Kendra—Private Water Supply Augmentation Project in Khandwa - A study of the impacts of the project—says the contract is greatly skewed in favour of the private company and through this PPP concession, the water supply and security of the town has been compromised. The project has been showcased in various circles, including at the Planning Commission, as being a successful model of executing PPPs in the water sector.

The Consumer Forum of Khandwa gave the stay on a plea filed by resident Laxmi Narayan Bhargav. KMC commissioner Shobharam Sholanki argued before the forum that the applicant is not a consumer as he pays water tax and not water charges, and hence could not be treated as an aggrieved person. Tarun Mandaloi, who represented the applicant asserted that services provided by a municipal corporation are within the purview of Consumer Protection Act, 1986.

KMC commissioner Sholanki further contended that the scheme has not yet been implemented, so at present there is no question of lack of service. But Shailendra Shukla, who presided the hearing along with forum members Maya Rathore and Nirmal Bajaj, cited section 2(G) of Consumer Protection Act, 1986 and maintained that any person claiming responsibility for providing a specific service, even if it seems that there is any irregularity, lack or inadequacy in services provided, it could be treated as lack of service.

The applicant mentioned several errors in the notification which could possibly hurt consumer interests and urged the Consumer Forum to stay the notification till the consumer complaints are redressed. Sholanki said that a proposal has been sent to the government of Madhya Pradesh to look into the objections received till 30 December, last year. The notification will be published only after redressing these objections.

The Consumer Forum ordered KMC to redress all the complaints received by it on the notification and then publish it. Citizens not satisfied by this shall be free to file a petition before the Consumer Forum or any other appropriate court.

As the project construction nears completion now, more and more people, citizen groups and local organisations are become aware of the possible disadvantages of water supply privatisation. The project's construction phase was expected to be completed by September 2012.

Gaurav Dwivedi of Manthan Adhyayan Kendra said that the Consumer Forum's order is an important development concerning privatization of water services and might prove useful in other places where privatisation is proposed. Several activists are concerned that the National Water Policy considers water as an economic good. Treating water as a commodity could lead to privatisation of water supply, they say.