US energy bill passed by house of representatives 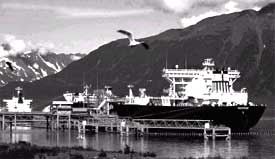 the us house of representatives passed a controversial energy bill on April 21, 2005. The bill gives billions of dollars of subsidy to fossil fuels and permits drilling in the Arctic National Wildlife Refuge. It also provides product liability protection to makers of methyl tertiary butyl ether (mtbe) against lawsuits and gives us$2 billion royalty relief to the oil and gas industry for research on recovering oil and gas from the depths of the Gulf of Mexico. The White House has said in a statement that it "strongly supports" the bill, though expressing reservations on some minor aspects.

The bill is similar to a plan rejected by the senate in 2003. But its proponents believe they might be able to push it through due to the rising oil prices. Its critics say it propagates energy production and use and does little for conservation or for promoting renewable energy. "Instead of helping people save money, the bill is loaded with tax breaks and royalty relief for oil and gas companies," points out Nancy Pelosi, democrat representative from California.

The bill's approval by a vote of 249 to 183 was preceded by an exhaustive debate on the mtbe issue, which had led to the 2003 plan's rejection. The issue will also be crucial in determining the bill's fate in the senate. Leakages of mtbe, an oil additive, have been detected from underground storage tanks across the us . Groundwater contamination thus caused in 29 states carries a potential cleanup cost of us $29 billion, representatives informed the house. About 80 lawsuits have already been filed against the contamination, leading to mtbe makers demanding liability protection. The bill fulfils this demand.

It also provides about us $8.1 billion tax incentives and subsidies to the energy sector, most of it going to the oil, natural gas, coal and nuclear industries. Another controversial provision of the proposed legislation is the authority it grants to the federal government to determine the location of liquefied natural gas terminals receiving tanker imports. This amounts to "trampling on the rights of states and individual communities," feels Mike Castle, representative from Delaware. Further, the bill requires refiners to use five billion gallons of corn-based ethanol by 2012, a 20 per cent increase over the industry's expected 2005 production. It also alters the Clean Air Act by giving localities receiving polluted air from distant states more time to meet air-quality norms.