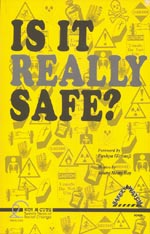 We are all sitting on a time bomb slowly ticking away. That, in a nutshell, is what the latest publication of Consumer Unity & Trust Society (cuts) drives at. The second in the series of publications under the series title 'Caveat Emptor', this book is a compilation of articles on consumer awareness of the safety aspects of various products and services. It is also a voyage through products used on a day-to-day basis without any understanding of safety or its lack.

Issues such as product safety (cosmetics, mosquito repellents, firecrackers) and services safety (joyrides, escalators and buildings) are discussed here. An important section is devoted to drinking water. In fact, "no institution can be ultimately held responsible for the quality of water, because nobody has defined standards that can be legally enforced".

However, it is the chapter on Health Care Safety, which proves to be the most disturbing. What is otherwise considered a life-giving source can at times poison lives. In late 2001, 30 children died in Assam after being administered doses of Vitamin a in a unicef-Assam Government jointly organised Pulse Vitamin a programme. The book also raises the question of safety of vaccines. It discusses Hepatitis b vaccination, a part of the national immunisation programme in 120 countries, and expected to make it to India's 10th five-year plan. It draws attention to issues such as a 1999 survey by Vienna-based National Vaccine Information Centre, which revealed that the number of vaccine-associated adverse events and deaths reported in us children under 14 outweighed the reported cases of Hepatitis b disease in that same age group.

The chapter addressing food safety is topical and unnerving. It explodes the myth of safe and delicious chocolates; discusses adulterated edible oil; demonstrates milk as white poison; captures the great Indian iodised salt debate; and last, but not the least, pesticides in food. It refers to studies carried out by the Indian Council of Medical Research, Industrial Toxicology Research Centre, Annamalai University, all of which show how Indian food is heavily contaminated with pesticide residues.