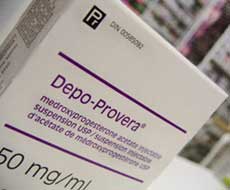 depo-provera, a hormonal contraceptive injection approved for use by women has been found to increase the risk of diabetes in some women.

The study, done by the researchers from the University of Southern California in Los Angeles, was carried on 526 Latino women who have an increased propensity of diabetes during pregnancy. Some of these women were put on Depo-Provera, while the rest were on oral contraceptives. After a nine-year-long follow up, researchers found the annual incidence rate of diabetes was 19.1 per cent among those who received contraceptive injection; those on oral contraceptives showed only 11.9 per cent cases. The paper has been published in the March issue of Diabetes Care.

Earlier in 2004, the drug was issued with a black box warning by the us Food and Drug Administration and its manufacturer Pfizer Inc, cautioning that prolonged use of the drug may result in bone density loss. Despite this, it is marketed aggressively in developing countries, where it is considered as the contraceptive of choice for the injection has to be taken only once every three months. In countries such as Pakistan and Sri Lanka, the drug is a part of the public health programme.

In India, the drug is available but isn't a part of the family planning programme. Health experts are against it, for it does not protect women from sexually transmitted diseases.