Copper-T better in emergency, but doctors do not encourage its use 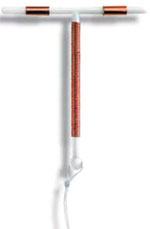 EMERGENCY contraception has become synonymous with the morning-after pill. But use of intrauterine devices (IUDs), popularly known as Copper-T in India, can be more effective. A review of studies of IUDs for emergency contraception has found that IUDs inserted within five days of unprotected intercourse prevented pregnancy 999 times out of 1,000—a failure rate below 0.1 per cent. Morning-after pills, in comparison, have failure rates 10 to 30 times higher (1 per cent to 3 per cent), depending on the type of pill chosen. They also have side-effects like nausea and irregular periods.

An IUD is a T-shaped device made of copper and inserted into the uterus. It has been in use for over three decades and is generally touted as a long-term contraception method. The earlier IUDs acquired a bad reputation because they had severe side-effects like bleeding and infection. The modern-day IUDs do not have such side-effects.

Researchers led by Kelly Cleland from Princeton University in the US reviewed all literature available on the efficacy of IUDs published until August 2011. The idea was to quantify the effectiveness of IUDs as an emergency contraceptive.

Thorough analysis of various databases yielded 274 studies, out of which 42 were selected because they met all the criteria set by the team—were peer-reviewed, had a defined population of women who were provided with an IUD and number of pregnancies and loss to follow-up (people who duck out of the study after participating initially) were ascertained. Of all selected papers, 28 were in Chinese and 14 in English. Chinese studies were used because the use of IUDs is the highest in the country—43 per cent Chinese women use the device for contraception compared to 13 per cent in the rest of the world.

They found that of the total number of subjects—7,034—only 10 pregnancies were reported after the insertion of an IUD within five days of unprotected sex (see ‘How IUD works’). “We can say that IUDs are more effective. But each woman must assess her situation to decide which is the best emergency contraceptive method for her,” says Cleland. She explains that for a woman who has access to healthcare an IUD can be inserted within five days of intercourse, but for a woman who is unable to get any medical help or cannot afford IUD, the emergency pill will be the best option. The study was published in Human Reproduction on May 8.

Though IUDs may be a better emergency contraceptive they are hardly prescribed. Sonia Naik, a gynaecologist with Sitaram Bhartia Institute of Science and Research in New Delhi, says that while IUD may be effective, it is not always advisable. “The contraceptive method depends on a girl’s unique situation and history,” she says. “In young girls, for example, casual sex is quite common. You can’t recommend Copper-T for a few reasons.” Naik explains that one of the ways IUD works is by causing inflammation of the endometrium—the inner lining of the uterus where the embryo is implanted. “Inflammation of the endometrium can cause problems later when they actually try for pregnancy.” Moreover IUD lasts between five and ten years. If these women want to get pregnant, they will have to go for IUD removal, which can be inconvenient.

The reluctance to prescribe IUD in an emergency situation is not limited to India; in fact, it is a global phenomenon. A study by US researchers published in February in Obstetrics and Gynaecology had found that 85 per cent of clinicians in the US never recommend IUD for emergency contraception. Vineeta Bal of Saheli Women’s Resource Centre in Delhi, a feminist collective, says, “IUDs also do not provide protection against sexually transmitted diseases and HIV, so they are only advisable for women who have one stable partner.”

Another factor pushing the use of the pill is cost. While contraceptive pill is readily available at Rs 50 per pack, IUDs cost between Rs 300 and Rs 500 in private set up. Indian government provides it free of cost at its family planning centres. IUD insertion also requires a minimum of two visits to the doctor. “In a country such as India where emergency pills can be purchased over the counter without a prescription, it doesn’t make sense for women to opt for IUD for one-time use,” says Cleland.

No takers for IUD

Leave alone emergency contraception, the IUD is also not the method of choice even for long-term contraception (see ‘Contraceptive alternates’). According to data with India’s National Family Welfare Plan, the use of IUDs was 16 per cent in 2011—5.6 million insertions, which is a one million decrease from the previous year. The oral contraceptive pill, that is taken for 21 days in a month, found 8.3 million acceptors.

Of all couples availing government’s family planning programme, only 6 per cent opted for IUD contraceptive, as against sterilisation (26 per cent). “The government hasn’t aggressively pushed the method. People, who avail private sector’s control programme don’t use them because the private sector has no incentive in promoting it. It’s cheap and lasts at least three years. Private clinics want multiple visits to garner money,” says Bal.

Suneeta Mittal, head of the department of gynaecology at All India Institute of Medical Sciences in Delhi, says that while IUD is part of government population control programme, there is hardly any infrastructure or trained personnel to insert these devices in women. “For this reason, it’s not a contraceptive of choice for most women,” she says. Health activist Mira Shiva adds, “It is also not feasible in rural set up because of unhygienic conditions. It results in infection. You can’t ignore health in the name of population control.”

But all’s not bad. The review has found that IUDs are a boon for heavier women. The morning-after pills mainly consist of ulipristal acetate and levonorgestrel. The Princeton study found that levonorgestrel might not generally work in women with a BMI of 26 kg/m2 or above. Ulipristal acetate may be ineffective for people with a BMI of 35 or more. IUDs are equally effective for women with varying BMI.