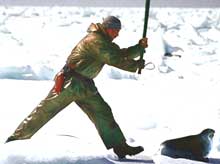 A massive seal hunt, supported by poor coastal communities for the big money it brings them but opposed by animal rights activists, began in Canada on March 29, 2005. The Canadian government justified the hunt, citing record levels of seal population and decreasing commercial fish stocks; seals have voracious appetites, especially for cod. It also claimed that this hunt, the biggest in the country in decades, will be more humane than earlier. Over three million seals will be killed this year. But animal rights groups have called for a boycott of Canadian seafood to protest the move.

"We're going to be encouraging consumers to enter into dialogue with their grocery stores and their restaurants and say 'Please don't serve Canadian seafood' or 'I won't buy Canadian seafood until this hunt is over'," Pat Ragan of the Humane Society of the us was quoted as saying.

Canada's hunt of the harp seal has triggered protests since the 1960s, which led the us and many European countries to stop importing seal products in the 1970s and 1980s. The hunt begins about two weeks after seal pups are born and the colour of their fur changes from white to grey.