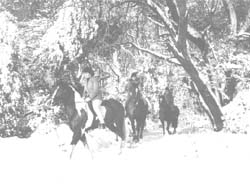 unpredictable stormy winters in northern Europe are known to put life out of gear. Now, their uncertainty may be a thing of the past because researchers in the uk have found a link between temperatures in the Atlantic and an atmospheric effect that influences European winters. Since the 1930s, climate experts have known that an atmospheric pressure pattern, known as the North Atlantic Oscillation ( nao ), determines the kind of winter weather Europe experiences. nao flips between two states: in the first, a region of low pressure develops, and in the other, low pressure develops over Iceland. If the later prevails, northern Europe has wet and blustery winters, with up to 30 per cent more rainfall than the average, while southern Europe suffers drought. Winter weathers could now be predicted if the forecasters could determine the state of nao.

Climate modellers at the Meteorological Office in Bracknell, uk , have now shown that the temperature pattern across the surface of the Atlantic could be the key. A significant discovery was made by Mark Rodwell and his colleagues using a computer model of the Earth's atmosphere. They fed in temperature measurements taken at the surfaces of the world's oceans since World War II. When they ran the model on a Cray computer, the researchers found that the sea temperatures revealed the right nao state two times out of three, with the hit rate of extreme nao s as accurate as three times out of four. With other researchers claiming to be able to predict sea surface temperatures with reasonable accuracy years in advance, the new results raise the possibility of doing the same for nao, and hence the winter weather over Europe.

Rodwell, however, cautions that the patterns of sea temperatures changing the nao state can be so subtle that only broad-brush forecasts covering the whole of Europe over several years can be made. But he adds, "It might be possible to give some indication of really strong nao events." The findings are also likely to prove useful to climatologists trying to gauge the effect of global warming on specific regions of the Earth. "Understanding whether the rise in temperatures from the 1960s to the 1990s is due to global warming or natural variation is important. We have highlighted the interaction between ocean temperatures and the atmosphere," says Rodwell.

James Hurrell, an expert on nao at the National Centre for Atmospheric Research in Boulder, Colorado, usa , says the new results bring our understanding of nao closer to that of its famous Pacific cousin, El Nio. "A lot of people have thought about the role of sea surface temperatures, and this study is very suggestive," says Hurrell. "It is the first to be able to duplicate the trend we have seen in the nao over the last 30 years or so," he adds.