Farmers concoct pesticides out of colas 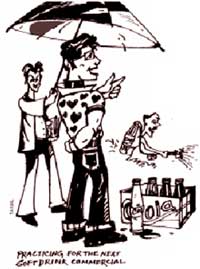 One day in September this year, Rama Bhadraiah had a windfall. This small cola supplier in village Nadikude in Andhra Pradesh's Guntur district sold 50 crates of nine bottles each. Elsewhere, in village Bhaisra in Chhattisgarh's Rajnandgaon district, Kishan Katlam -- a small farmer -- waxes eloquent about Pepsi. These examples could have warmed the cockles of the cola honchos, but they are in fact quite embarrassed. For, the upswing in Rama Bhadraiah's fortunes, or Kishan Katlam's encomiums to Pepsi, does not mean that people in rural Chhattisgarh and Andhra are gulping down more soft drinks. Farmers in these states have simply started using colas as pesticides.

Varying concoctions and potions are sprayed. In Palanadu region in Guntur district Andhra Pradesh, a litre and a half of the soft drink is combined with a litre of the pesticide, Ekalux. The mixture is sprayed over an acre (0.4 hectares, ha) of land. Elsewhere in Jashpur district, Chhattisgarh, farmers add Coke and Pepsi to their traditional anti-pest mixture of jaggery and mahua (Madhuca indica). Here just two 1.2 ml bottles suffice for 0.4 ha. And in Adilabad district, Andhra Pradesh, farmers spray cola directly over their crops. They require about 10-15 litres of soft drink per 0.4 ha.

But how effective are these concoctions? According to Katlam, "The colas are much more effective than Phorets [the chemical pesticide conventionally used in his village]. Last year, we staved of a maho (Nephotettix sp, a pest) attack by spraying colas on our paddy crops." "Even our sarpanch uses them," he adds. Elsewhere in Tandur village in Adilabad, Manikondu Ramu experimented with the cola pesticide in his 0.8 ha land, with encouraging results.

But not everybody is impressed: Samasetty Kondaiah and T Nagi Reddy, from Dachhepalli in Palanadu sprayed cola in their 0.8 ha land, but the results weren't impressive. In nearby Kesannapalli, nearly 200 farmers jumped on to the Cola bandwagon, only to be disillusioned. "I will never use colas again," says M Hanumantha Rao, a resident of the village. But B Narayana Rao, also from Dachhepalli, differs: "I found colas useful and will spray them again in my fields,'' he says.

There is another significant reason why farmers such as Narayana Rao won't give up easily on the colas: they don't have to worry about spurious pesticides now. That was a major cause for farmers' suicides in Andhra Pradesh. Besides, the concoction has no side effects. And in Chhattisgarh, farmers have another cause for satisfaction: their pesticide bill has come down significantly. Earlier they had to spend Rs 70 per 0.4 ha on Phorets, now they can do with two cola bottles, which cost Rs 10.

While farmers exude delight at the new-found concoctions, scientists urge caution. Sanket Thakur, a scientist at the Indira Gandhi Krishi Vishwavidyalaya, Raipur, says it would be early to conclude definitively. "Farmers have so far sprayed cola only on their paddy crops. We must wait and see if this practice works over long periods and on other crops." "Of course, it's possible that the carbohydrates in the colas strengthens the resistance power of the crops against," he adds.

Scientists from the Archarya N G Ranga Agriculture University, Hyderabad, recently collected crop samples sprayed with cola. They are conspicuously tight-lipped about their research results. However, one of them does note, on conditions of anonymity, that mixing cola with pesticides might increase its stickiness and draw ants that kill pest-larvae. But he also pointed out that there was nothing in the colas that could be toxic to the pests.

Meanwhile, colas are doing brisk business in rural Andhra and Chhattisgarh. Anupam Verma, sales manager, Pepsi, Chhattisgarh notes, "Our rural sales have increased by 20 per cent." He, however, hastens to add that this is not due to their use as pesticides. But could it be that the much-touted secret content of the colas is coming into its own?