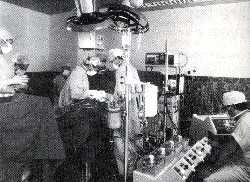 studies in the us show that special proteins can prevent rejection of transplanted organs in monkeys without the need of immune suppressant drugs. If the same technique applies to human, patients would not have to take long-term drugs to avoid rejection of the foreign tissue. A brief course of protein injections has shown that monkeys can accept transplanted organs without reactions from their immune system.

Researchers at the University of Wisconsin in Madison and the Naval Medical Research Institute in Bethesda, Maryland, developed the technique that helped monkeys to avoid permanent immune suppressive therapy after kidney transplants.

A naval research team transplanted kidneys of 12 monkeys from donors who had a severe mismatch with the recipients. Four animals that did not get additional treatments died within eight days of the transplants. A few other monkeys that received only one antibody out of the two proteins such as ctla 4-1 g and 5 c 8, rejected the transplanted organs after nearly 100 days.

According to the researchers, two monkeys that were injected with both proteins for 14 days also rejected the transplants. However, the two animals that received a combination of both the injections for 28 days are reported to be healthy. They did not exhibit any sign of organ rejection for more than 150 days and are alive. Their immune systems are functioning well.

The proteins injected in the animals helped block the signals from t -cells. t -cells use a two-stage system to protect the body from foreign bodies such as bacteria. One stage recognises that the foreign body or organ is not a normal part of the body. The second stage leads to production of other t -cells that attack the foreign bodies. When the antibodies ctla 4-1 g and 5 c 8 are injected in the body, they overpower those cells that normally alert t -cells about a foreign tissue. In this process, specific proteins that are responsible for the production of other t -cells are blocked.

Experts say the results are very satisfying. But six months is not a long period to ascertain the efficacy of the treatment. Several studies would be required to know the long-term effects of the proteins on humans as against the effects of immune suppressant drugs used routinely by patients after undergoing transplants.