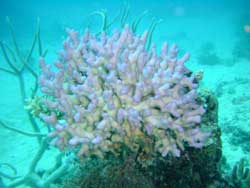 an epidemic of coral bleaching has adversely affected Australia's Great Barrier Reef for the second time in four years. This was revealed during a survey recently carried out by the Australian Institute of Marine Science. The epidemic is also fast spreading to the islands of the South Pacific. Coral bleaching occurs when higher sea temperatures force algae out of the coral polyps. These algae have a symbiotic relation with the corals and they lend them their brilliant colours. Usually, bleached coral recovers in the next cool season, but if all the algae are lost, the corals die and the reefs crumble.

According to the Great Barrier Reef marine park authority, bleaching around Keppel island is extreme, with almost all the species suffering there. Other places badly hit include Whitsunday island and Magnetic island. The bleaching follows record sea temperatures since the beginning of the year. "Almost the entire reef's temperature was 2c or more above normal for more than two months starting from early January to mid March," said Thomas Goreau, president of New York-based Global Coral Reef Alliance. "This was warmer and longer than the bleaching that wiped out the Maldives, Seychelles and western Australian reefs in 1998."

The high temperature seems to be connected to the onset of a new El Nio, which also caused the said bleaching in 1998. But Goreau says that global warming is the key underlying factor. "It means that the reefs are already under stress before the El Nio start," he said.

According to him, catastrophic mortality of corals would have certainly taken place by now. He alleges that the Australian government is reluctant to discuss the extent of bleaching because of its ambivalence about action on global warming.

Marine scientists across the world are very concerned about the bleaching, especially in the wake of numerous reports about many bleached, dead coral lying across much of the South Pacific, including Tahiti, the Cook Islands, New Caledonia and Fiji. "It will take a long time before we have full confirmation of the magnitude of the disaster," he said. "But when it is all in, I predict we will have confirmation that almost all corals across the entire South Pacific have died in the last few months."