A Chinese architect claims he can stop the Leaning Tower of Pisa from tilting further, and even bring it back to the original angle of tilt. 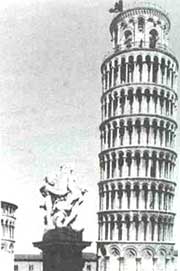 A 61-YEAR-old Chinese architect, Cao Shizhong, who specialises in setting tilting structures straight, dreams of restoring the Leaning Tower of Pisa to its original tilt, a feat that would make him a millionaire.

The Leaning Tower of Pisa could never attain its planned 13-storey eminence for when the tower had risen eight storeys high in 1350, it was found that it had strayed 2.1 metres from the vertical and consequently, construction had to be abandoned. Today, the medieval curiosity is 4.5 metres off plumb, looming threateningly over surrounding monuments. Shizhong wants to restore the structure to its 14th century tilt and not make it upright "otherwise it will no longer be a leaning tower" (Far Eastern Economic Review, Vol 156, No 19).

Whoever can arrest this catastrophic incline will walk away with a booty of about $100 million, which has been offered by assorted governments and conservation authorities. Several proposals have been offered so far to rectify the fault including propping up the tower with an arched buttress and holding it straight with electromagnets.

Shizhong has been obsessed with the Pisa wonder since the time he was a boy growing up in the Zhejiang province of China, whose boggy ground resembles the Arno basin soils around Pisa. So far, he has set vertical 26 tilting structures in China. His greatest triumphs have been two pagodas, one nearly 600 years old and another almost 1,200 years old, which he says he realigned in a couple of months.

Though the Chinese maverick refuses to share his secret, he says one aspect of his method is to dig watertight chambers around the base of the tower to give the sub-soil column room to swing back into place. Once the Leaning Tower stands straight, he proposes to brace it in place and prop it from underneath by reinforcing the soil.