..per villager per year. And the benefit of an ultraviolet disinfectant is potable water for a community of 1,000 people for 15 years 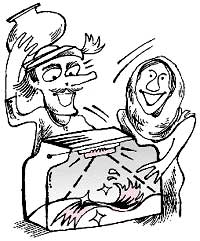 ashok Gadgil, a scientist at the Lawrence Berkeley National Laboratory (lbnl), California has invented a device that uses ultraviolet (uv) rays to disinfect water. The invention could dramatically improve health conditions in India and other Third World countries.

The uv purifier, called uv Waterworks, uses just a fraction of energy required by existing water purification schemes and is 20,000 times more efficient than boiled water. The device, less than 70 cm long and 25 cm high, can provide drinking water for a community of 1,000 people for 15 years.

uv Waterworks is easy to use, and purifies water for as little as two cents per tonne of water (one cent = 35 paisa approximately), according to Gadgil. This nearly works out to potable water for seven cents per villager per year, or just one-third of what the National Drinking Water Mission considers affordable. "By our calculation," says Gadgil, "such a village unit, will avert 15 deaths of children below age five and avoid the stunted growth of 150 children over 15 years of its useful life." In epidemic conditions, the health benefits would multiply.

The water purifier is a boon to communities as a whole and rural women in particular. "Because women are primarily responsible for collecting fuelwood, fetching water and bearing and caring for children, the uv disinfection system could greatly improve women's quality of life by reducing their workloads,' Gadgil wrote in lbln's newsletter.

An earlier version of the purifier was the centrepiece of a workshop organised three years ago by the laboratory and the Orissa Renewable Energy Development Agency (oreda) in Bhubaneshwar. In Orissa, where hundreds of infants die every year from water-borne diseases, the benefits of such a device are crystal clear. The 1994 workshop introduced the purifier to government officials and ngo representatives and gained support for field testing. As a result, unicef funded the testing of uv units in Orissa.

The purifier uses uv light to kill water-borne bacteria and viruses by deactivating their dna and thereby squelching their capacity to multiply. The lamp in the purifier is like a standard fluorescent lamp, except that it uses a special glass that allows uv light to pass through. Operating 12 hours a day, the unit, which costs us $300 to manufacture, needs maintenance only twice a year and a new lamp every other year. uv Waterworks uses only 40 watts of electricity and can run on electricity from a car battery or small photovoltaic panels.