Green laws to be diluted 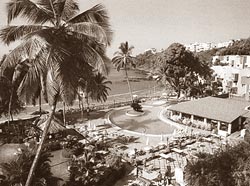 in his generous pre-election mood, Prime Minister (pm) Atal Bihari Vajpayee has assured some Bharatiya Janata Party (bjp)-governed states that important environment laws would be relaxed. The coastal states have been promised that the coastal regulation zone (crz) rules, which control development and construction activities along India's coastline, would be amended. Also in the offing is the watering down of rules and laws pertaining to noise pollution, forests and wildlife.

In a meeting of bjp chief ministers (cms) in New Delhi on January 20, Goa cm Manohar Parrikar made a representation seeking an amendment in the crz rules under the Environment Protection Act, 1986. The dilution was sought to foster the growth of the state's tourism industry. Parrikar argued that a single set of central regulations could not govern developmental activities along the country's vast coastline, and so each state should be empowered to formulate its own policy.

Goa, he contended, should have differentiated rules for its 105-kilometre coastline. Parrikar also demanded a change in noise pollution laws for promoting tourism in the state. Other bjp cms backed Goa's assertions.

Later in the day, bjp president Venkaiah Naidu said: "(The) Union government is actively considering the suggestions on changes in law." Sources in the Goa government also claimed that Vajpayee had resonated the mood of the meeting. The pm was said to have maintained that all development work along the coast could not be considered anti-environment, and the noise pollution and crz rules should be amended to factor in regional needs.

Other bjp-ruled states like Chhattisgarh, Jharkhand, Madhya Pradesh (mp) and Arunachal Pradesh apparently sought amendments in forest laws to lease out forestland to people who have been tilling such tracts for the past 25 to 30 years. The pm was reportedly amenable to these too.

Significantly, the request of Digvijay Singh, the former Congress cm of mp, to reform forest laws had been ignored by the Union government earlier. But now the centre finds it lucrative to ease the laws in the name of development and help certain lobbies, claimed a high-level source in the Union ministry of environment and forests.

M K Ramesh of Bangalore-based National Law School of Indian University concurred, saying: "The construction, tourism and development lobbies have always found loopholes in crz rules to exploit resources in league with the state governments. They have often run to the centre for relaxing them, too, and seem to be at it again in wake of the elections." And the pm, they perhaps know, is willing to oblige.