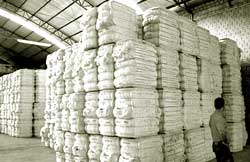 the World Trade Organization (wto) set up a special subcommittee on cotton on November 19, 2004, to address the issues concerning cotton trade "ambitiously, expeditiously and specifically". The step was a compromise for the four West African nations, which had asked for a prompt end to billions of dollars of subsidies given to cotton producers, mainly in the us and the eu, in 2003.

A landmark wto decision in May 2004 had ruled in favour of Brazil, which had claimed that us subsidies were damaging its cotton trade (see 'Torn to shreds' Down To Earth, May 31, 2004). But the subsidies still exist, because the case is embroiled in a lengthy appeal process. Agricultural trade issues such as subsidies are normally negotiated in the wto special session of the Committee on Agriculture but the importance of cotton trade for many poor developing countries encouraged the handling of cotton negotiations separately. Benin, Burkina Faso, Chad and Mail, the four West African nations that proposed the idea to set up the subcommittee at the wto ministerial summit in July 2004, hoped it would lead to a quick end to the subsidies (see 'Multilateral Fillip' Down To Earth , August 31, 2004).

us cotton subsidies in 2001 amounted to us $3.9 billion, 64 per cent of the world total for the commodity. A study commissioned for the four nations claimed that these subsidies depressed the world price of cotton by 10 per cent, causing a substantial loss in revenue for cotton exporting developing countries. Cotton exports account for over five per cent of the gdp of the four countries. They claim the subsidies cause them a direct loss of us$250 million a year.

If these projections are true, other cotton exporting poor countries would also be losing substantial revenue due to the subsidies. But the National Cotton Council of America (ncc) disagrees. In a press release following the subcommittee's formation, ncc chairman Woody Anderson said he would "not support an inequitable approach to agriculture negotiations that seeks to single out the industry unfairly".