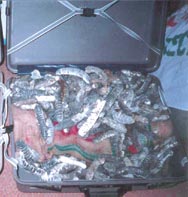 Not narcotics. Not gold. But sea cucumbers. In the past six months, five major seizures of consignments of this marine life form have taken place in India -- the latest case being reported from Chennai. It seems that the ban on the trade of sea cucumbers (Holothurians), in force in India since July 2001, has ironically pushed the species on the verge of extinction. Following the clampdown on regulated dealings in the species on the Andaman and Nicobar Islands, smuggling operations have intensified. Gangs and former farmers of the union territory regularly sneak out sea cucumbers to mainland India and Southeast Asia.

Sea cucumbers are important components of the food chain in temperate and coral reef ecosystems. They fetch a sum of Rs 6000 to Rs 7,000 per kilogramme (kg) in India. The rate in the international market is still higher at Rs 10,000 per kg. Sea cucumbers are used in medicines to relieve rheumatoid pain and also as an aphrodisiac in Southeast Asian countries.