Countries complain about slow pace of progress at Bonn 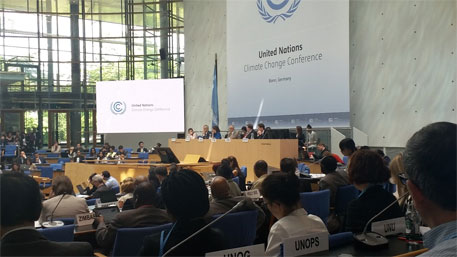 The stocktaking section that took place on Monday saw more than 20 countries complain about the slow pace of progress at the Bonn climate change conference.

The European Union said, “This exercise has resulted in immense amount of trust building between parties as well as between facilitators, co-chairs and the parties. However, reduction of few pages of text should not be deemed as success. It should be noted that Kyoto Protocol is 18 pages long and the text for convention is 22 pages long. We have a long way to go to reduce the Geneva text so that we can have a concrete option once we finish this exercise on Thursday.”

The EU was responding to session co-chair Ahmed Djoghlaf’s opening comments where he had said that the first and the second reading of the text had been very successful and that success should not be judged by the number of pages reduced. Twelve meetings of negotiating groups and 32 facilitation meetings had led to the consolidation of 59 paragraphs until June 6.

Korea and South Africa on behalf of the G77+China, Sudan on behalf of the Africa group and Malaysia and Maldives on behalf of the AOSIS (Alliance of Small Island States) group endorsed the idea of increasing the pace of work. They also emphasised that it was important that the secretariat put out a cleaner text which emerged from the streamlining exercise of week one.
The chairs released the “streamlined and consolidated text” by 2 pm on Monday. This text was updated again by 7 pm.

Susheel Kumar, lead negotiator from India, raised concerns about Workstream II. “Workstream II has not got enough time during this Bonn session. Pre-2020 ambitions are very important from developing countries’ point of view,” he said.

Djoghlaf, however, contradicted and said that countries were not prepared for certain areas of Workstream II and any slow progress was because of the parties. Another facilitated discussion on Workstream II has been organised on June 9.

Co-chair Daniel Reifsnyder said that the outcome of COP 21 at Paris would be a package—of the Paris agreement and a group of decisions complimenting the agreement. Talking about how the finance section in the agreement would be operationalised, Reifsnyder stated, “In a way, decision of parties supersedes the agreement.”

This has enabled discussions among the facilitated meetings on various sections as to what should be included in agreement and what would be part of the decision of parties at COP 21 in Paris in December.

The co-chairs reiterated the principles that will guide negotiations in the three days that remain in this ADP session.

They announced that the next stocktaking meeting, if requested and needed by the parties, would take place on Wednesday.