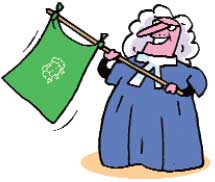 THE High Court of Andhra Pradesh on May 1 gave permission to the state government to issue pattas (title deeds) against forestland to 114,000 tribals and forest dwellers who depend on forests for livelihood. They had filed claims under the Forest Rights Act over the past two years but the state was not issuing pattas because a petition in the high court, opposing such title deeds, is yet to be decided. The court clarified the pattas will be subject to its final orders.

"It is an interim order as the Supreme Court is also hearing this matter. The high court will wait for the apex court's judgement before passing final orders," said K Balagopal, an advocate representing the forest dwellers.

J V Sharma, retired forest official, had filed a petition in the high court in 2007 opposing the Act on the ground that the Wildlife (Protection) Act, 1972 was adequate to protect the rights of the tribals. The Act is contrary to some parts of the Wildlife Protection Act and will encourage false claims leading to destruction of forests, the petition said. On August 19, 2008, the court allowed the state government to accept and verify the claims but not issue titles without its permission. "Since the government had verified the claims, it approached the court asking for permission to issue titles," Balagopal said.

A total of n ine petitions have been filed against the Act by conservation groups and retired forest officials since 2008. Some courts have allowed processing of claims but not issuance of titles.