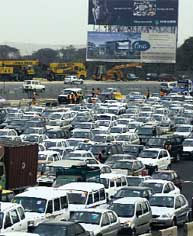 In future, car owners in Delhi may have to shell out money for passing through congested areas of the city. This follows a judgement of the Delhi High Court directing the city authorities to consider all options to clear road congestion. This may include deterrent measures like levying congestion fees on private cars passing through crowded areas.

“Delhi will not be unique if such measures are actively pursued and implemented,” the three-judge bench said while referring to London. The orders were passed on petitions filed by two non-profits—Manushi and Initiative for Transportation and Development Policy—that opposed the cap on the number of cycle rickshaws plying in Delhi. The court declined to cap the number of rickshaws in the city.

The court also directed the Delhi government, Delhi Police and civic authorities to constitute a special task force comprising traffic experts, urban planners and traffic police to recommend ways to minimize road congestion and ensure equitable access to all classes of vehicles including cycles and rickshaws.

P K Sarkar of the School of Planning and Architecture said private vehicles in Delhi are growing at the rate of over eight per cent annually (see box).

"Without such measures, traffic growth cannot be curtailed," he said while adding studies are needed.

If the traffic in an area is more than 50 per cent; only then congestion charge should be levied, he said.