This department has a will of its own: ignores government policy for fly ash use 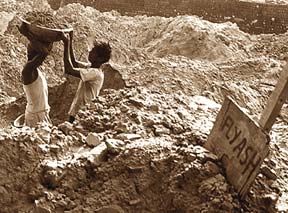 Should fly ash be treated as waste or a useful byproduct? The Indian government and its Central Public Works Department (cpwd) don't agree on this matter. The result: gross underutilisation of this coal combustion product, leading to environmental damages and financial loss.

The government promotes the use of fly ash in construction work. President A P J Abdul Kalam recently called for raising its utilisation from the current 27 per cent to 100 per cent. The Bureau of Indian Standards (bis) now allows blending 35 per cent fly ash with cement, against the earlier 25 per cent. The government has also made the use of 25 per cent fly ash mandatory in the manufacture of clay bricks/tiles/blocks by units located within 100 kilometres of coal- or lignite-based thermal power plants (tpp). But its enthusiasm for fly ash has been crushed not only by private brick makers (see Down To Earth, 'Brickbats', Vol 13, No 8, September 15, 2004) but also the cpwd.

In 1987, the cpwd prohibited the use of Pozzolana Portland Cement (ppc), which contains about 25 per cent fly ash, in the manufacture of reinforced cement concrete (rcc) -- the mixture of cement, embedded metal and other materials used in construction work. Due to the government pressure to increase fly ash usage, on May 13, 2004, cpwd issued a circular that permitted "part replacement of Ordinary Portland Cement (opc) [which doesn't contain fly ash] by dry fly ash" but retained the ban on ppc. This, experts say, is an escape route. It gives cpwd the option to bypass bis norms and control the amount of fly ash in the cement. Permitting ppc would have meant definite and scientific use of a certain amount of fly ash. Upendra Malik, superintending engineer of cpwd's Central Design Organisation, which took out the circular, told Down To Earth that he didn't know anything about the order.

ppc is one of the best ways to utilise fly ash. But in India it comprises only 32 per cent of the total cement produced. The comparative figure in Europe is nearly 60 per cent, points out G Y Narayana, joint secretary of Cement Manufacturers Association. In fact, owing to its high demand in other countries, India exports fly ash to Dubai, Saudi Arabia, Cyprus, Iran, Nepal, Bahrain and Bangladesh at rates up to us $97.5 per tonne. But the snags in its domestic use would increase further due to the cpwd's prohibition, which would discourage other builders too from using ppc, Narayana feels. "We would complain to the ministry concerned," he warns. ppc was prohibited on the ground that it was less durable than opc. But experts disagree. "Research done by the Central Building Research Institute in Roorkee, the National Council for Cement and Building Materials in Ballabhgarh, the Structural Engineering Research Centre in Chennai, and the Fly Ash Mission in New Delhi prove that using fly ash with cement makes the concrete more durable," claims Vimal Kumar, adviser scientist to the government's Fly Ash Utilisation Programme (see box: How it works).
Fly ash is an alumino silicate glass consisting of oxides of silicon, aluminium, iron and calcium, with magnesium, potassium, zinc, sulphur and other trace elements which can leach into the environment and contaminate ground and surface water. Thus, disposing it off in ash ponds and landfills is risky, an expert points out. "About 108 million tonnes of fly ash end up in ponds and landfills over nearly 100,000 hectares every year. This wastes lots of water and land," he adds. If this ash is used in construction, it would help reduce a substantial amount of carbon dioxide (co2) produced in making cement; such manufacturing accounts for six to seven per cent of the co2 produced by human activities, globally.