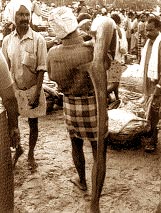 Fishing means survival for millions in India. Harvesting seas and rivers is a craft that has been honed to perfection over the centuries, the understanding of the waves and knowledge of technique handed down from generation to generation. The exhibition under review celebrates the astounding diversity of Indian fishing. We are shown intricate nets, fishing traps and models of boats, hailing from the Cape of Kanyakumari to the rivers of West Bengal.

Today, foreign imports threaten the self-sufficiency of fishing in India. One of the exhibition's contributors, the Central Institute of Fisheries Technology (cift), Cochin, is keen to protect and promote India's fisher folk communities in all their regional diversity, and create a self sufficient Indian market. T he institute's research into the potentialities of fish by-products in making biomedical, pharmaceutical, and preserved food products has reaped weighty rewards. On display are an eclectic variety of products derived from fish waste, such as surgical sutures made from fish gut, and collagen and squalene -- effective anti-cancer agents.

Environmental issues are also central to cift's projects. The exhibition shows this concern. It displays literature on preventing pollution, restricting conversion of lakes and wetlands -- for agriculture and housing -- controlling siltation of rivers, checking infestation of aquatic macrophytes and restricting the construction of multipurpose river valley projects.

Fisher Artisans of the Waters demonstrates the centrality of the ancient relationship of human beings and environment to the fish trade, while expounding the importance of tentatively embracing modernity. The story of how fish gets on to our plates is demonstrated here, and reverence for the complexities of its journey demanded and won.