URBAN local bodies in India’s scheduled areas have been functioning illegally for the past 15 years because of Parliament’s oversight. The Constitution mandates a law separate from the Panchayati Raj Act for rural and urban local bodies in scheduled areas—tribal dominated areas specified in the Fifth Schedule of the Constitution. Parliament enacted the Panchayat Extension to Scheduled Areas (PESA) Act in 1996 for rural areas, but a similar legislation for urban scheduled areas was never debated.

State governments are taking advantage of Parliament’s lapse to give speedy clearances to mining and industries in tribal areas. Their modus operandi is simple: they upgrade rural panchayats in scheduled areas to urban panchayats to bypass PESA which mandates village council’s approval for such projects.

Residents of Premnagar village in Chhattisgarh’s Sarguja district, a scheduled area, realised this when the state government upgraded their village into an urban area in March this year. Residents see the move as a conspiracy. They have been opposing coal-fired power plant and mining in their locality using PESA provisions. Upgrading the village’s status has done away with the need to obtain approval from the panchayat. 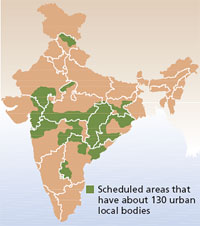 The village moved court challenging the constitutional validity of the decision. The Chhattisgarh High Court declined to stay the elections to the newly formed urban panchayat that will replace the village council. But the court admitted the case and issued notices to the state on December 1.

“The state’s decision takes away people’s rights over local resources granted under the scheduled areas laws,” said Sudha Bharadwaj, counsel for Premnagar residents. The Panchayati Raj Act meant for urban local bodies does not apply to scheduled areas and so the decision is illegal, she said.

Premnagar’s case is not an isolated one. In the past few years, more than 600 village panchayats, many of them in scheduled areas, have been converted into urban local bodies, and these areas have major industrial investment proposals. Of the 60 districts of the country (the number does not factor in new districts carved out of these districts post- 2000) that have scheduled areas (see map), there are about 130 urban local bodies that have been kept out of PESA.

Jabalpur court sets precedent In neighbouring Madhya Pradesh, too, many village panchayats have been replaced with urban local bodies. But there the Jabalpur High Court stayed elections to 52 district panchayats and municipalities in 26 districts having scheduled areas. In September 2009, the court held the Panchayati Raj Act did not apply to scheduled areas and said Parliament should enact a suitable law extending PESA to urban scheduled areas.

Article 243ZC of the Constitution mandates that the provisions of the 74th constitutional amendment shall not apply to urban local bodies in scheduled areas unless the Centre makes a law for governing them. Till that time no elections will take place in such urban bodies, the court said. Now, civil society groups in other states with scheduled areas plan to seek similar stay orders.

Amitabh Singh of Debate, a nonprofit in Madhya Pradesh, who has helped communities claim rights under PESA, said, “Without extending PESA to urban local bodies, the purpose of the act is defeated. On the other hand, one gets suspicious of the fact that government has been upgrading many rural panchayats into urban ones, keeping them out of PESA’s purview.”

C R Bijoy of the non-profit Campaign for Survival and Dignity in Delhi said petitions in other courts did not succeed because of stiff opposition by state governments. The Ranchi High Court in Jharkhand, while disposing of a batch of petitions, said Article 243ZC would not supersede municipal laws existing prior to the 74th Amendment. Appeals against this judgement are pending in the Supreme Court.

So, for 15 years urban local governments functioning in scheduled areas can be termed invalid. “It is a constitutional crisis similar to that of 1990s,” said B D Sharma, a tribal rights activist who played a pivotal role in PESA legislation. He was referring to the events leading to the enactment of PESA after the Panchayati Raj Act came into force.

Parliament did introduce a legislation in 2001—The Municipalities (Extension to Scheduled Areas Bill)— that protects land rights of tribals and provides for a standing committee on tribal affairs in each municipality (see box). The Parliamentary Standing Committee on Urban and Rural Development recommended its adoption in November 2003.

Since then, the Bill has been listed in the Rajya Sabha for discussion every session. This winter session, it was omitted from Parliament’s list of business.