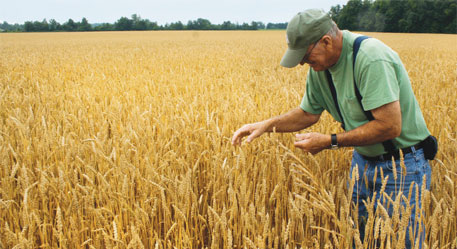 Rising carbon dioxideÃ”Ã‡Ãªlevels are lowering the nutritional quality of food crops. For the first time,Ã”Ã‡Ãªit has been shown through aÃ”Ã‡Ãªfield study thatÃ”Ã‡Ãªelevated carbon dioxide levels curb plants’ ability to convert nitrates into proteins.

The study used wheat samples grown in Phoenix, Arizona, US, under carbon dioxide levels expected in the next few decades.Ã”Ã‡ÃªThree different test on the plant leafÃ”Ã‡Ãªshowed a fall in nitrate assimilation. On an average, the increased carbon dioxide levelsÃ”Ã‡Ãªcaused a decline of 8 per cent in protein concentration of the crop. The study was published in Nature Climate Change on April 6.

Proteins are vital for human nutrition and wheat accounts for one-fourth of protein in human diet globally. In previous studies, food cropsÃ”Ã‡Ãªsuch as rice and barley have also shown a similar fall in protein content due to high carbon dioxide levels. Researchers estimate thatÃ”Ã‡Ãªthe increase in carbon dioxide levels could lead to a 3 per centÃ”Ã‡Ãªreduction in Ã”Ã‡Ãªprotein content in the human diet.