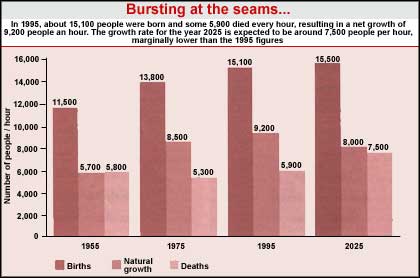 In the beginning of the 20th century, the Earth was home to some 1.6 billion people. Towards the end of the century, more than six billion people crowd our planet. This year, international organisations such as the World Health Organisation, Population Reference Bureau and the United Nations Population Division calculated that nine times as many children are being born in the developing countries than in developed ones. Therefore, population growth in the next millennium depends wholly on how much the birthrate in the developing nations slows down