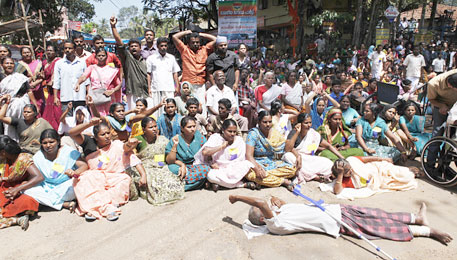 In a new twist to the ongoing battle between the Thiruvananthapuram City Corporation and the Vilappil gram panchayat over municipal waste, a division bench of the Kerala High Court on February 24 suggested that the Central Reserve Police Force (CRPF) could be called, if required, for providing protection to the corporation’s trucks carrying garbage to its waste treatment plant in Vilappil, 15 km from the city.

The court was hearing a petition by the corporation that said the state police were not extending full support for implementing an earlier order it had issued. On January 23, the court had ordered the corporation to resume shifting the city waste from Thiruvanthapuram to Vilappil plant and directed the state police to provide security to the garbage trucks. The corporation had stopped lifting the waste since December after Vilappilsala Janakeeya Samara Samithy (VJSS), a group spearheading people’s agitation against dumping the city waste in the village, prevented the garbage trucks from entering the village.

Until then, the corporation was dumping more than 200 tonnes of waste on the premises of the waste treatment plant at Nedumkuzhi village in Vilappil panchayat every day.

The gram panchayat and VJSS are determined not to allow the garbage trucks despite the court order. “This is a life and death battle for us,” says L Beneckson, secretary of VJSS. “We have been suffering for the past 12 years because of the environmental pollution caused by the waste treatment plant,” adds S Burhanudeen, president of the committee.

The Vilappil gram panchayat council has decided to stand by its people. “Just like the corporation we are also a local body, and it is our primary function to take care of the health of our people and manage waste properly,” says S Shobhana Kumari, president of the panchayat council. The gram panchayat plans to move the Supreme Court against the High Court’s order for providing police protection to garbage trucks.

“The situation has reached a stage where it is impossible to implement the court order,” the chief minister said at a press conference. The state government has appealed before the court to allow seeking help of an intermediary for solving the issue instead of applying force.

A decade of struggle

Vilappil residents’ gripes about the waste treatment plant are not new (see box: ‘Genesis of the waste war’). They have been complaining against it since 2000 when the corporation established the plant at Nedumkuzhi village.

They intensified their agitation last year and started a relay hunger strike in January. The strong protests spurred Chief Minister Oommen Chandy to convene an all-party meet in September. Assuring that the plant would be closed permanently, Chandy sought time till March to resolve the issue.

“We agreed for three months' time,” says Beneckson. “But nothing happened and the corporation continued to dump waste at the plant site,” he says, adding that when the deadline got over on December 21, the committee decided to prevent all garbage trucks from entering the plant site. The panchayat council closed the gate of the plant on the same day.

This had a direct impact on Thiruvananthapuram city, where garbage started piling up on the roadsides and clogged the drains. Unexpected cyclonic rains worsened the situation. Garbage started floating and spreading everywhere. The corporation moved the high court for respite.

Following the court order on January 23, the plant gate was opened on February 4 under tight police security. But a week later, the day the corporation resumed moving waste from the city to Vilappil, about 5,000 people, mainly women and children, blocked the road leading up to the plant. Around 500 policemen were deployed with guns and batons to disperse the residents. Even after the police applied brutal force and lobbed tear gas shells, people refused to make way for the trucks. Finally, the police and the garbage trucks were forced to retreat. Prohibitory orders were imposed under section 144 of the Criminal Procedure Code in Vilappil and nearby Vilavoorkal panchayats for one week. Cases of contempt of court have been registered against the panchayat president and the agitation committee leaders for not allowing implementation of the court order.

Environmentalists, rights activists and legal experts have come out openly against the high court’s stand in the Vilappil waste issue. Allowing the corporation to transport its waste to Vilappil is unjust, undemocratic and unconstitutional and against existing rules and regulations, they point out.

“The corporation has been violating laws all these years,” says C R Neelakandan, a prominent environmentalist. It has never managed its waste properly or scientifically as stipulated under the Municipal Solid Wastes (Management and Handling) Rules of 2000, he says. It neither properly segregates the waste at the source, nor does its waste treatment plant work effectively and uninterruptedly. Besides, the plant has no scientific landfill facility or leachate treatment plant. As per rules, waste should never be dumped in the open, especially in a residential area. Hundreds of thousands of tonnes of unsegregated waste lie in mounds, causing air and water pollution in Vilappil and nearby panchayats.

K Meera, advocate commissioner appointed by the high court in January to investigate the ground realities of the waste issue, also criticises the management of waste at the plant in her report. The machines in the plant did not show any sign of being operated recently. “Accumulation of untreated mixed wastes in such huge quantities continuously over a long period of time has created an unhygienic environment. At any rate, management of waste at the plant ought to have been better and organised,” the report states.

“When the corporation’s unscientific waste management and unlawful deeds have created social, economic, health and livelihood issues in a region which is under the administration of another local body, how can the court direct the corporation to resume waste transfer to the plant, that too under police protection?” asks Neelakandan.

Ironically, the corporation’s waste treatment plant has neither the mandatory licence from the panchayat nor the no objection certificate (NOC) from the Kerala State Pollution Control Board. “The panchayat issued license only at the time of inception of the plant in 2000,” points out S Sobhana Kumari, panchayat president. After that it has never been renewed.

In a simlar case regarding municipal waste dumping by Payyannur Municipality, the Kerala High Court in 2004 had asked the municipality to stop dumping and manage its waste scientifically. Later, in 2009, it had quashed all criminal charges registered against the residents of Moorikkoval for blocking the garbage trucks and said, blocking unlawful activities of a legal body is not unlawful.

“When Vilappil residents block corporation’s garbage trucks in peaceful manner, it cannot be termed unlawful,” points out Kaleeswaram Raj, a legal and environmental expert practising in the Kerala High Court. The argument that the corporation has been dumping waste for a long time in a particular place does not make that act lawful or give them right to continue dumping, he says.

City tries to manage its waste

Interestingly, the city does not look dirty now, even though the corporation has not been lifting waste from the city since December 21. Of the 203 tonnes of waste the city generates every day, 114 tonnes is biodegradable waste from households and hotels, 36 tonnes is plastic waste and 53 tonnes is non-biodegradable waste mixed with plastic. Following a direction by the corporation in January this year, resident welfare associations, hotels and slaughter houses have started dealing with their own waste. Several flat owners have also resorted to simple composting technologies like pot composting and pipe composting. The attitude of the people towards waste has started changing. “The corporation should now take forward this change in the attitude and go for decentralised waste management instead of encroaching into another local body’s power and territory and violating laws as well as human rights,” says Shibu K Nair, a waste expert working with Thanal, a Thiruvananthapuram based NGO. Centralised waste treatment may be needed, but only for about 10 per cent of the waste the city generates, he adds.

As activists and experts point out that agitations against municipal waste dumping are taking place at least in half a dozen places across Kerala including Lalur, where well-known social activist and writer K Venu staged a 11-day hunger strike against Thrissur corporation. It is high time that the local bodies and the state government addressed the issue in a holistic manner. Undemocratic and unlawful ways to crush the protests will lead to bloodshed and discontent.
Web Specials Web Specials Web Specials Waste treatment plant Waste dumping Vilappilsala … Vilappil gram panchayat Thiruvanthapuram … protests Poabs Group Nedumkuzhi Municipal Solid … L Beneckson Kerala High Court Centre for … Central Reserve …
SUPPORT US