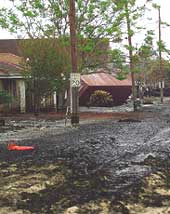 Oil storage tanks ruptured by hurricane Katrina are estimated to have dumped around 14 millions litres (ml) of crude oil into the Lower Mississippi river and surrounding wetlands in Louisiana, usa, threatening the region's environment. Some of this oil would also find its way into the Gulf of Mexico. Louisiana Department of Environmental Quality (deq) officials estimate the spillage roughly to be a third of the size of the 1989 oil spillage by tanker Exxon Valdez, which ran aground off Alaska, spilling nearly 41 ml crude oil into the ocean.

The largest of the current spills, about 12.5 ml, is believed to have occurred after two 80,000-barrel storage tanks ruptured at a production site at Cox Bay, Louisiana, just above the mouth of the river. The second spill at an oil refinery at Meraux, Louisiana, is estimated to have released about 1.5 ml crude into a flooded area. Since it is difficult to access the area, it is currently unclear how much oil has been lost, deq said in a press statement.