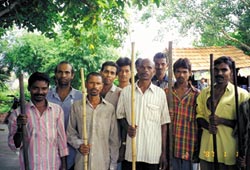 orissa's forest authorities and forest management groups are at loggerheads. The cause of the dispute: the state government's decision to constitute forest development agencies (fdas) in 27 forest divisions.

fdas, created under the National Afforestation Programme for monitoring plantations, are headed by the state conservator of forests. The agencies are also empowered to oversee the functioning of joint forest management (jfm) committees, thereby curbing the latter's autonomy (see: Double whammy, December 15, 2002). Not surprisingly, the Orissa government's move has raised the hackles of forest protection federations, activists and voluntary organisations.

In fact, members of Van Suraksha Samitis (vsss) have threatened to destroy forests if the decision is implemented. "Instead of promoting the efforts of the vsss, the state government is imposing a new structure without public debate," asserts Y Giri Rao of Vasundhara, a Bhubaneswar-based non-governmental organisation working on sustainable development.

Moreover, the forest department is said to have handpicked a few people from the vsss for each of the executive committees of the 27 fdas. Activists accuse the forest department of having entrusted only some samitis with financial power, overlooking scores of other organisations such as forest federations, and community forest management and jfm groups. "The department is now using the fda as a tool to shatter the cohesion in the federations," points out Barna Baibhab Panda, programme coordinator of Nayagarh-based Jungle Suraksha Mahasangh, Orissa's self-initiated federation of forest protection communities. The composition of the fdas' executive body, too, has left the activists apprehensive. Only 20 vss members are part of the 42-member panel.

However, Prem Kumar Jha, divisional forest officer of Angul, says: "The vsss which cooperated with the department have been given priority. Some of the more efficient ones have also been selected to take up different developmental projects under the fda." When asked to elucidate about samitis falling under the latter category, Jha was evasive.