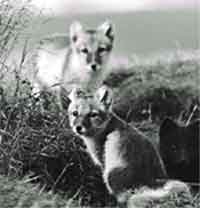 conservationists are debating the reintroduction of wolves in forest areas as a means of preserving forests. Rhum, a remote island off the west coast of Scotland, uk , and a national nature reserve, is in the heart of the controversy following a proposal to rehabilitate wolf populations to check the devastation of the forest caused by the overgrazing sheep and teeming numbers of red deer ( Alternatives Journal , Vol 23, No 3).

Supporters of the proposal say it would help avoid the deer culls that are undertaken to conserve the remaining woodlands. They cite examples from other parts of the uk where reintroduction programmes have been successful. Red kites were reintroduced into the British countryside between 1989 and 1993. Populations have been steadily growing since. Another example presented is from Brazil where the golden lion tamarin monkey was successfully reintroduced in the 1980s following massive conservation education programmes. The creation of public awareness brought about local involvement in conservation efforts.

Those opposed to the proposal point out that the 100 sq-kilometre-island is not large enough to support populations of wolves. The island is unsuitable habitat for wolves, says Tim Clutton-Brock of the Large Animal Research Group at the University of Cambridge. The soil of the island is waterlogged and the wolves will not be able to dig the dens they need for shelter, he adds. It is also pointed out that for any reintroduction to be successful, habitat restoration has to be undertaken first.

Also involved in the issue are the interests of the farmers in the Scottish mainland and, more importantly, the five families that live on the island. Farmers fear that the wolves may be able to swim to the mainland and interfere with farming activities, especially predation of livestock.

Wolf reintroduction programmes in the Yellowstone National Park, usa , have highlighted the problems faced by farmers. Over 30 grey wolves were released in the park over the last two years to check the growing numbers of elk and bison. Several wolves have been killed in the area including one shot by a farmer for preying on sheep. Those opposed to the proposal say that the large amount of money spent on reintroduction programmes can be better utilised in other areas of conservation.