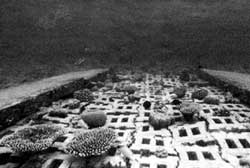 BRITISH scientists claim to have unravelled the mystery that enables corals, sea urchins and other marine invertebrates to build complicated crystalline structures from calcium carbonate dissolved in sea water, and are now using the trick to develop their own weirdly shaped crystals. The researchers say that this could be a boon for industrial material scientists - particularly those dealing with computer discs and cassette tapes - as crystals with different shapes and sizes have different properties (New Scientist, Vol 146, No 1981).

In trying to imitate the marine invertebrates, Stephen Mann, Jon Didymus, and Stephen Sims of the University of Bath are crystallising solutions of salts containing various addi tives, in a bid to create their own crystals of more exotic shapes.

The University of Bath team first discovered that adding tiny amounts of lithium ions to their solutions enabled the calcium carbonate to form hexagonal structures similar to those formed by oysters and other seashells.

Taking a cue from these organisms which use not only simple ions but also proteins rich in aspartic acid (an aminoacid) to control crystal growth, the researchers turned to a polymer consisting of a chain of aspartic acid molecules.

When they added a small amount of this polyaspartate to a solution of calcium carbonate, they discovered that the crystals formed strange shapes with spiralling protuberances.

The researchers believe that the polymer combines with calcium carbonate in solution to form a gel, which they suspect coats the growing crystals, blunting their sharp edges and preventing calcium carbonate from being deposited regularly. The result is a crystal with smooth surface that looks similar to those produced by marine invertebrates. Though they cannot, as yet, control the shape of growing crystals precisely, the scientists believe that this should not be a problem because it might be possible to grow the crystals in molecules containing cavities that would act as templates. The sea organisms, in fact, use such molecular containers to grow and control the shape of crystals. "In the long run, we hope to grow inorganic crystals with tailored organic shapes," claims Mann.