A dose of political will, backed by communication skills, can help combat infectious diseases 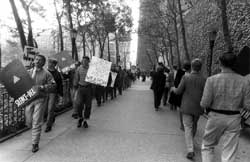 the challenge faced in the control of infectious diseases such as hiv/aids, tb and malaria is now seen more as a political and communications one than scientific and medical. Medical and technical solutions to keep major contagions in check are now available. Yet, they remain major killers, says a recent who report. The report, titled Scaling up the response to infectious diseases: A way out of poverty, reveals that these tools can reduce tb and malaria deaths by 50 per cent and cut hiv infections among young people by 25 per cent within the next decade. But the need of the hour is mobilisation of political and social capital to ensure that these interventions are used effectively.

The report suggests ways in whichnew resources can be better utilised and combined with novel marketing and communications approaches to encourage "healthy behaviour". Significantally, the document points out that a key resource in pursuing behavioural goals in national disease prevention programmes is political will. But political will would vanish if massive and successful action to expand interventions, extended health services and mobilisation of healthly behaviour are not forthcoming.

The report observes that there is a lack of commitment to employ the available prevention and treatment strategies for controlling these diseases. Painting a grim picture of the developing countries, the report laments that the public health system in these regions is poorly equipped to tackle infectious diseases. Moreover, good private health care is too expensive for the poor. In some countries, 60 per cent or more of government health spending is devoted to urban hospitals serving just 10 per cent of the population. When the public sector fails to meet the health needs of the population, those living in poverty opt for more expensive private medical services. For instance, in India, the report highlights, up to 90 per cent of household expenditure on health is spent on private-sector health care, with the poor paying more than the rich.

Emphasising the need for applying resource and knowledge, the report reveals that together hiv/aids, tb and malaria have claimed 5.7 million lives last year, many of them in their most productive age. By 2020, unless there is a dramatic turnaround, aids will have caused more deaths than any other disease in history. The situation becomes even more grave as current malaria treatments are losing their potency because of the increasing prevalence of drug-resistant parasites. According to the report, the vicious circle of poverty leaves the underpriviledged more prone to diseases. But globalisation has taken in its wake infectious diseases to developed countries also. Any further laxity and the hiv/aids epidemic in China, India, large parts of central and eastern Europe and the central Asian republics could surpass the scale of the current epidemic in Africa.

Taking a close look at the financing of health services, the report brings to the fore the fact that the governments of some poor countries devote a meagre us $ 10 per capita to health and more on defence. Very little money is invested in medical research. For example, less than one per cent of the us $70 billion spent in 1998 on the research and development of new medicines, vaccines and diagnostic tools was devoted to hiv/aids, tb and malaria. Of the 1,233 drugs that reached the global market between 1975 and 1997, only 13 were for tropical infectious diseases that primarily afflict the poor.

The who document acknowledges the key role played by non-governmental organisations (ngos) and the civil society. New resolve to scale up the global response to these diseases of poverty has been evident lately. In spite of many obstacles, a few countries have managed to mobilise funds, skills, knowledge and action to reduce the impact of infectious diseases. To tackle these diseases, proper deployment of communications and marketing strategies to encourage healthy preventive behaviour is required, suggests the report. The supply of medicines must also be increased. There is a need to expand, diversify and refocus existing health services. For health programmes, the private-sector consumer communication resource should be tapped. Above all, the report recommends decentralising health services by devolving decision-making and funds to district or local authorities and strenghthening their capacity to make services more responsive to public health needs.