Green algae can revitalise streams poisoned with mine acids 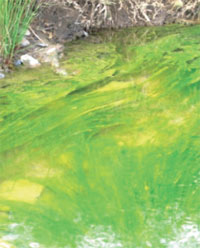 TRAVERSED by numerous toxic and highly acidic streams, coal-rich Jaintia Hills is the victim of affluence.

Since mining is unregulated in Meghalaya, people in this district indiscriminately extract coal from beneath the land they own, using primitive techniques. Children squeeze into rathole-like tunnels, extracting coal with hands. Heaps of mine spoils and coal lie scattered. Runoff water, leaching out toxic heavy metals from the coal, and acidic effluents from the mines poison water sources, turning them yellow, smothering plant and animal life alongside.

Two scientists from North-Eastern Hill University in Shillong have found a way that could potentially heal these toxic streams—by planting filamentous green algae, or Microspora quadrata as scientists call it.

The scientist duo stumbled upon the algae during a field trip to Jowai in 2008 to study the variation in the heavy metals load in the streams in different seasons. The town along the National Highway-44 is the hub for coal trading in Jaintia Hills. “We noticed M quadrata growing luxuriantly in these streams, which do not support any other life form due to high acidic content,” says P Ramanujam. She and her colleague Mautushi Das monitored the amount of algae and heavy metals across five streams near Jowai for two years. The streams were flowing adjacent to coal heaps on the roadside or through rathole mines, both active and abandoned. For all the four seasons, acidity of the streams ranged between 3.18 pH and 4.35 pH. This is when pH of the nearby Myntdu river into which these streams flow was 6.67.

The scientists examined the algae and found they have an immense capability to adsorb heavy metals, such as iron and lead. The accumulation of heavy metals in the algal mat was higher than in the stream water, in all seasons and at all sites.

Accumulation of iron was maximum at coal storage sites during autumn and that of lead was maximum in active mining areas during spring. The load of manganese was significantly high at storage and active mining sites in spring and summer-monsoon seasons. The load of heavy metals varied in the streams corresponding to the growth of the algae, which was the least in monsoon. It seems the algae thrives on acidic water and the metals brought by the mine effluents, says Das. It could help reduce the toxic effect of those metals to certain level, they noted in the report published in International Journal of Botany on August 30. The scientists have brought the algae samples to the lab for further investigation and plan to introduce the algae in other degraded streams.

Environmental activists are not hopeful. Arpan Sharma of Samrakhan Trust says one could talk about remediation if mining in the region was scientific. Over six decades of unregulated mining has pushed the streams beyond recovery.