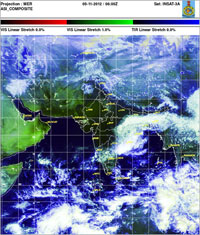 Many rivers and rivulets are in spate and several areas in Srikakulam, Vizianagaram, Visakhapatnam, East and West Godavari, Krishna, Guntur, Prakasam and Nellore district are flooded. Many villages remain marooned. Navy helicopters have been deployed to rescue those trapped in flooded areas. Narasapur in West Godavari district recorded 310 mm rain on November 3, the highest in the state on a single day in recent past. 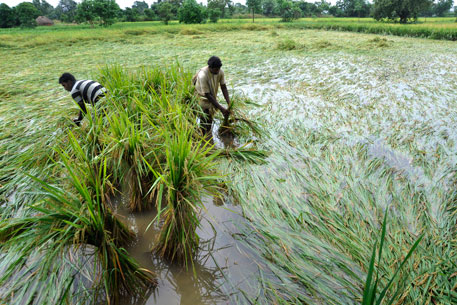 According to the disaster management officials, 480 houses were fully damaged and 766 partially. They said 495 km of roads, 406 km of drains, 107 km of water supply lines, 36 municipal buildings and 10,882 streetlights in the state were also damaged. Officials say at least 250,000 hectares of crops may have been damaged in the flood. More accurate assessment can be made only after the flood waters recede. The kharif crop in the Godavari delta is the worst hit. Cotton, chilli and tobacco crops have suffered heavy damage in Guntur and Prakasam districts.

National Highway 5 from Chennai to Kolkata, passing through the coastal districts of Andhra, is inundated in several places. Rail tracks have also been damaged. A number of bus and train services have also been cancelled. 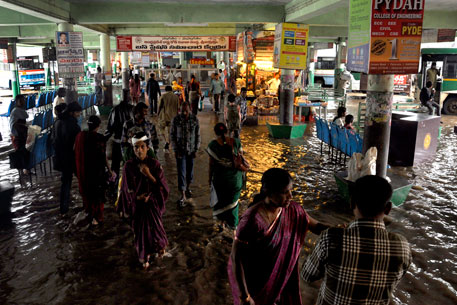 Cyclonic Storm Nilam originated from a depression in the the Bay of Bengal on October 28 at 500 km south-southeast of Chennai.

The cyclone hit the Indian coast at Mahabalipuram in Tamil Nadu on October 31. The wind speed had reached 110 kilometre per hour.

While revenue officials are engaged in evacuating and shifting people from low-lying areas to shelters, the meteorological department has predicted more heavy rains in the next 24 hours.

In Tamil Nadu, seven people lost their lives in the cyclone. They include six of the crew members of Pratibha Cauvery, which grounded at Besent Nagar beach in south Chennai on October 31. The sailors lost their lives after a lifeboat they were using to leave the ship capsized. While the body of one was found on the day of cyclone, the others were reported missing. Over the last two days, bodies of other sailors have been found at different places off the coast.