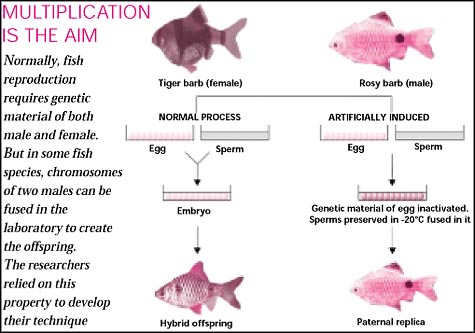 indian scientists have evolved a cost-effective genetic technique to breed offspring of endangered fish. "The method will boost conservation efforts especially at grassroots level because it can be used even in laboratories with modest facilities," claims T J Pandian, leader of the team from Tamil Nadu-based Madurai Kamaraj University that has developed the technique.

As many as 2,118 fish species are found in India, out of which 50 are of economic importance. Several studies have shown the country's fish biodiversity is fast dwindling for reasons such as habitat destruction and overfishing. Therefore, it is imperative to protect their gene pool.

Of late, cloning as emerged as a viable technique to conserve most species. It involves creating an animal by transferring genetic material of an adult cell into an egg whose genetic material has been removed. The egg is subsequently treated with chemicals or exposed to electric current to induce cell division, which leads to the creation of an embryo.

Such cellular manipulations are difficult in fish as the nucleus of their cell is not easily traceable. Hence, scientists have been looking for alternatives.

Captive breeding is one option, but it too has drawbacks -- it is only possible if there are both sexes of a species existing in certain numbers. Unfortunately, this is not the case with many fish species.

The technique developed by the university researchers entails only using sperms to spawn offspring. They have not developed a technique involving only eggs because it is difficult to preserve them. Sperm consists of 99 per cent water and one per cent genetic material, making it easy to preserve it. The egg, on the other hand, consists mainly of yolk containing fats and proteins. The presence of these makes it difficult for an egg to be preserved at low temperatures.

Since conservation was their main aim, Pandian and his colleagues decided to use sperm of dead fish. A technique earlier developed by the group enables them to preserve sperms of dead fish for 30-300 days when kept at a temperature of -20c. On thawing, the sperm is as active as those of live fish.

To achieve their goal, the researchers exploited a unique genetic property of fish that allows them to reproduce using only paternal chromosomes. Normally, the birth of any organism requires at least two sets of chromosomes -- one maternal, the other paternal. But in some fish species, under laboratory conditions, chromosomes of two males can be fused to create the progeny. Called androgenesis, this process involves destruction or inactivation of the maternal chromosome present in the egg -- an essential prerequisite to fuse the sperms.

The university scientists used this method to fuse sperms of the rosy barb (puntis conchonius) species. They used the egg of the 'compatible' tiger barb (puntius tetrazona) species. They inactivated its genome by irradiating it with ultraviolet rays. Then they incubated the sperms in a diluted solution of a chemical called polyethylene glycol (peg) for 10 minutes to facilitate the simultaneous entry of two sperms into the egg. peg has the ability to attract adjacent membranes and can therefore fuse two sperm together. To fuse the sperms, the researchers also tried another method -- in the egg, they exposed the sperms to a temperature of 41c. Even this method proved effective.

Once the sperms were fused, the activated egg (embryo) was transferred to a plastic tray filled with a special solution that aided its growth. After a few days the egg hatched, resulting in a male rosy barb. As per the researchers, such male fish are capable of siring female progenies. This is because it produces two types of sperms, one with an x (female) chromosome and another with a y (male) chromosome. Though such occurrences are less in the first two generations, the male-female ratio is restored to more or less the normal levels after the third generation.

The technique has several advantages as compared to cloning. Apart from being inexpensive, it does not set in senescence -- the problem of early aging found in cloned animals.

Moreover, apart from the restoration of endangered fish species, this technique can also be used to artificially induce spawning of commercially important fish varieties such as carp, which otherwise spawns once a year. The method can also help in the generation of seedlings of migratory species like eel by using their frozen sperm and eggs from different but suitable fish species.