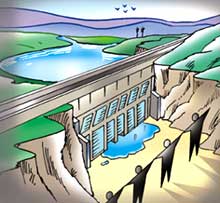 The Rs 7,759-crore, 1,000-megawatt project is the biggest private sector hydroelectric project in the country and is being executed by the Jai Prakash Industries group.

The project has been embroiled in controversies for years. In June 2003, residents of Karcham and Tapri villages rejected the project at public hearings. The environmental impact assessment report was not given to the villagers in time, and was flawed anyway. Elements -- like the mandatory disaster-management plan -- were missing. Given that the Sutlej basin, where the dam is located, is flood-prone, not having a disaster-management plan could be costly. "Carrying-capacity studies, flood-risk management and reservoir-induced seismicity studies have also not been conducted," says Himanshu Thakkar of the South Asia Network on Dams, Rivers and People, an ngo.

The project was then scrutinised by a committee of Himachal's science and technology department. Another public hearing was held in November 2004; the villagers protested again. Nevertheless, in July 2005, the state sent the proposal to the Union ministry of environment and forests (moef) for clearance.

The Karcham case brings out the friction between states and the Centre over environmental clearance. There have been many cases in which states have protested against moef clearing projects which states had not passed. The Chamera iii and Parbati iii hydel projects in Himachal, are good examples. Himachal had rejected the project but moef gave environmental clearance. moef got its own back with Karcham: though the state had cleared it, moef reviewed it and took its own sweet time while granting clearance, after changing a number of stipulations mandated by the state. "We found a number of problems with the eia and the project. How did the state government clear it?" asks an moef official. The Centre and states have frequently clashed on this issue.

Karcham was cleared on November 9, 2005, with a condition: "As the dam height is more than 30 metres, clearance from National Committee of Seismic Design Parameters of Central Water Commission (cwc) should be obtained." Strangely, moef cleared the 98-metre-high dam -- in a seismically vulnerable and flood-prone area -- without seismicity-related clearances. O fficials argue they have said cwc's clearance is mandatory.

Sapni villagers got going as soon as they realised that work had begun. The most recent order to stop work came after widespread protests and a complaint filed by the gram panchayat of Sapni. It argued that the project violates the Himachal Pradesh Transfer of Land (Regulation) Act, 1968. An amendment to the Act makes it mandatory for investors to get consent for any project from affected gram sabhas before seeking clearances to start work or acquire land. "The gram sabhas of villages to be affected ... were never consulted. The question of consent does not arise," says Shyam Sunder Negi, of the Karcham Wangtoo Pariyojana Sangharsh Samiti.

"There were large-scale demonstrations in several villages when the company started work on the tunnel. Villagers say that clearance was not taken from them and raised concerns about environmental impacts. We had no option but to stop the work, otherwise the situation would have got out of hand," says Pathania. He had called a joint meeting of villagers and Jaypee officials on November 29. No consensus was reached. "Another consultation might take place soon," he says.

Jaypee claims all is well. "Interaction with local residents and administration is a continuous process. Work is continuing," says a spokesperson. But Pathania maintains it has stopped.

Villagers continue to protest. After the joint meeting, over 1,000 villagers held a protest meeting near Karcham. "Our demand is to scrap the project. We would prefer micro-hydel projects here," says Negi. Villagers say they will not relent till the project is reviewed. "We will not hold consultations with Jaypee till the state agrees to our demand," says Vir Singh of Tapri.

Villagers in the surrounding area are supporting the affected villages. In November, several villages in Bawa valley had stopped the construction of a road. "Villages throughout Kinnaur district are supporting us," says Negi.