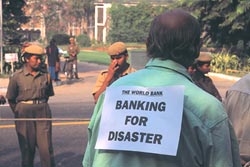 a series of anti-globalisation protests in Washington D C against the annual meetings of the World Bank and the International Monetary Fund (imf) were unable to recreate the spark of the earlier years. The meeting which took place from September 25-29, 2002 failed to even produce the expected number of protesters. Many in the anti-globalisation movement are now reviewing the situation for better performances in the future.

Compared to the strong 20,000 anti-globalisation demonstrators brigade, that had nearly shut down the city of Seattle in the year 2000, this year only a fraction of that crowd showed up. While police claim that there were 3,000 to 5,000 demonstrators, organisers argue that the numbers were in the range of 15,000 to 20,000. But it was evident that the streets were less densely packed as compared to the Seattle meet. Last year the annual meetings of these institutions were called off in view of the terrorist attacks.

The disappointing turnout was widely attributed to a shift in activist priorities and a disruption of momentum since the September 11, 2001 terrorist attacks. However, despite the weak turnout, the police arrested more than 600 demonstrators.

Environmental groups have been working for decades to change the policies of the World Bank and imf. Protesters allege that the world's most impoverished countries have suffered under imf/ World Bank programmes for the past two decades. They have seen debts rise, unemployment skyrocket, poverty increase and environment devastated.

"The us has a dictatorial position because it contributes maximum funds. We want a democratic institution, and the World Bank has failed miserably to achieve that," said Antonia Juhasz from the San Francisco-based International Forum on Globalisation. World Bank spokesperson Tom Dawson, however, denies the allegations. He says that both the financial institutions are striving to promote economic prosperity in underdeveloped nations.