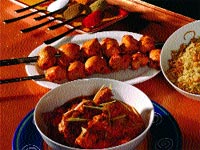 Hazardous levels of colouring agents in the uk's favourite dish, chicken tikka masala, have caused a stir among health officials. Trading Standard Institute, a consumer protection unit, took 102 random samples of the food item from Indian restaurants in the uk. Of these, only 44 contained the substance within permissible limits. The colourants that give the dish its distinctive orange appearance are known to induce hyperactivity, asthma and even cancer if consumed excessively over a long period. The tests focused on three specific chemicals -- Tartrazine (e 102), Sunset yellow (e 110) and Ponceau (4 r). Both Tartrazine and Sunset yellow are banned in Norway and Finland. They are used in sweets, soft drinks and sauces.

Restaurateurs claimed their actions were dictated by customer preferences. They asserted that consumers would not accept the dish in its natural red hue. But they readily tuck into the chicken tikka masala if it is artificially coloured in a pinkish-orange shade.