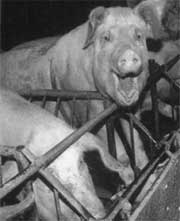 recently in Sonapur, Assam, heart surgeon Dhaniram Baruah and his team, including Jonathan Ho of Hong Kong, transplanted a pig's heart into Purno Saikia, a 32-year-old heart patient. Saikia survived for less than a week and fell to the grotesque experiment of an overambitious doctor.

Saikia, a terminally-ill patient, would not have lived longer in any case, but does that justify baseless experimentation? No scientific procedure that Baruah followed was disclosed and the whole exercise was more like the plot of a horror movie. Baruah, who is now behind bars, claims that it was an historic achievement as the patient lived for five days on a pig's heart, kidneys and lungs.

Transplant surgeons take organs from one body and integrate them into another, granting the lucky recipient a longer, better life. But the sad part is that every year thousands of less fortunate people die waiting for suitable organs to be found. The terrible constraint on organ transplantation is that every life extended depends on the death of someone young enough and healthy enough to have organs worth transplanting. Such donors are few and the waiting list is getting longer and longer.

Every transplant surgeon would like to be free from this constraint. So far attempts to make artificial organs have been disappointing: nature is hard to mimic. Hence there is a renewed interest in trying to use organs from animals.

Pressure to increase the number of such 'xenotransplants' is increasing. In Europe and the us, herds of pigs are being specially bred and genetically engineered for organ donation. Two big reports were published on the subject in 1996 -- one in Europe and the other in the us. They agreed that xenotransplants were permissible on ethical grounds, cautiously recommending that they be allowed. The ethics of xenotransplantation are relatively less worrying. People already kill pigs for food. Killing them to save human lives is easier to justify. But the science is much less straightforward.

An organ transplanted from one species to another may bring with it any number of infectious diseases. And coping with this danger is not merely a matter of screening for obvious ills like worms and bacteria such as Escherichia coli ( Recently, in Scotland, 13 people succumbed to the onslaught of E coli and about 200 were bed-ridden after having a steak pie dinner). Many diseases that could harm humans are undetectable and dormant in their natural hosts and may suddenly become active if they find themselves in a new environment. The probability of this happening should not be overlooked.

The dna of every organism carries within it hundreds of ghosts of infectious past. Such 'retroviruses' -- which include hiv-- always incorporate themselves into the dna of the hosts. Many retroviruses (although not hiv) also incorporate themselves into their hosts' eggs or sperm, and are passed passively from parent to child. Though most gradually lose their infectious powers, some retain their ability to leap out of the host dna-- often till much later. Certain retroviruses of pigs are probably among these.

There is a possibility that these retroviruses will not be harmful to humans. It is also possible that scientists will eventually isolate all prospective trouble-makers. But at a time when thousands of cows in Britain are being slaughtered because of the suspicion of having a disease that may be transmissible to humans, it seems a reckless gamble to take.